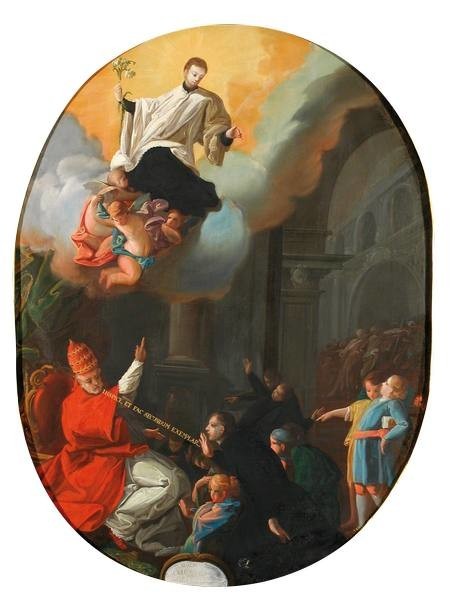 Arnaiz and Buendía have suggested that this work was located in the Seminario de Nobles (Jesuit school) belonging to the Calatayud Society of Jesus, and that following the expulsion of the order from Spain in 1767 the painting was taken to the Chapel of Nuestra Señora de Jaraba.

It was entrusted to the Museum of Zaragoza in 1985.

This oval canvas depicts the consecration of the young Aloysius Gonzaga as Patron Saint of Youth by Pope Benedict XIII. In this scene, the pontiff is addressing the faithful, pointing to the sky where we can see the saint wearing a Jesuit cassock and holding a Madonna lily, a symbol of purity. He is being carried up into the heavens by a host of angels. To reinforce the Pope's message, Goya has given him a speech scroll which reads INSPICE, ET FAC SECUNDUM EXEMPLAR ("Look, and do likewise"). In the lower part of the composition we can see a card which has been covered with white paint and inscribed with the words S. ALOYSIUS GONZA. J. A. SS. P. BENEDICTO BONUS EL EXEMPLA.

In the background we can make out the form of a temple where another scene is taking place: the burial of the saint's remains. The device of linking two episodes from the same story in the same space was very common in the baroque period.

The painting as a whole is an exaltation of the Jesuit order. The composition corresponds to baroque models, with a very marked diagonal line which divides the work into two spaces: sacred and earthly. The execution is still clumsy and severe. It is possible to detect the influence of José Luzán in the Neapolitan and Roman rococo style of certain elements such as the pastel tones employed for the clothing of the group of youths on the right.

The work is of dubious attribution, and various Goya experts do not include it in their catalogues, although others argue that this is an early work produced during the artist's training period.