The Cutting of a Woman’s Throat (La degollación) 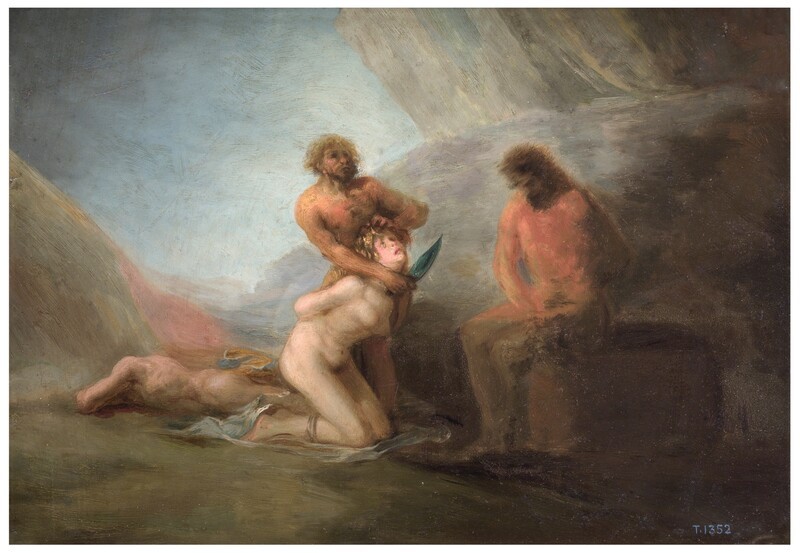 This work used to belong to the Countess of Villagonzalo and later entered the collection of Teresa Maldonado, Madrid.

This picture was painted as a companion piece to the work entitled The Bonfire and is related to the two paintings of cannibals in the fine arts museum of Besançon, Cannibals Preparing their Victims and Cannibals Contemplating Human Remains.

In the centre of the scene, a man is about to use a large knife to slit the throat of a naked woman, who is kneeling with her feet and hands bound, and who he is holding by the hair. The other figure in the scene, shown sitting on a rock, is contemplating, as if it were a trophy, the decapitated head of a man who has just been killed, and whose lifeless body is lying on the left-hand side of the scene surrounded by a pool of blood.

As in both Cannibals Contemplating Human Remains and Cannibals Preparing their Victims these acts are shown taking place in what appears to be a cave carved out of the rock. The faces of the murderers have been given simian features, in allusion to the primitive, violent instincts which have possessed them, whilst their dark complexions contrast strikingly with the immaculate white skins of their victims. In these works, Goya was reflecting upon the irrational dimension of the human mind, upon man's uncontrollable instincts, and was questioning the innate goodness of human beings in their primitive state.

There exists a replica of The Cutting of a Woman's Throat in the Prado Museum, painted on tinplate (29 x 41 cm) and donated to the museum in 1912 by the collector Cristóbal Férriz y Sicilia. The work now housed in the Prado was probably made by Goya for his own collection, whilst the one now belonging to the collection of Teresa Maldonado would have been sold. One of the few differences that can be appreciated between the two works is that, in the Prado piece, the scale of the figures is somewhat larger in relation to the overall size of the composition.