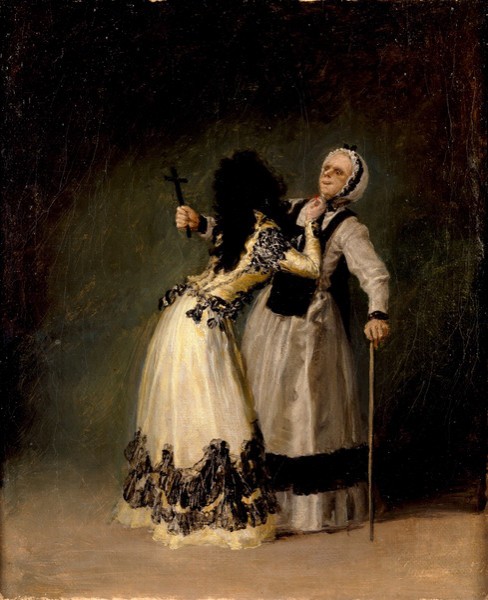 Luis Berganza, son of Tomás Berganza, the Duchess of Alba's administrator and one of the inheritors in her will, became the new owner of this canvas and its companion piece, "The Sanctimonious" with Luis de Berganza and María de la Luz. The work remained the property of this family's descendants until it was sold at Sotheby's in 1985. It was bought by the Spanish state, which acquired the work, by right of first refusal, for the Prado Museum.

When Goya painted this canvas he was fifty years old, and had only recently recovered from the illness which left him deaf. During his convalescence from this illness, spent in Cádiz, Goya made a series of small-scale cabinet paintings. These afforded him an opportunity to express himself freely in an artistic arena outside that of official, academic painting. Once he had returned to Madrid, the artist carried on working along the same lines as in those highly personal paintings produced during his seclusion. This same freedom of expression can be appreciated in the portraits he painted during this period of members of Madrid's aristocracy, among which are this work and its companion piece, "The Sanctimonious" with Luis de Berganza and María de la Luz.

The close relationship between Goya and the Duchess of Alba, whom he painted on several occasions, meant that the artist enjoyed access to the private sections of the palace, located in Madrid's Calle del Barquillo. This oil painting, which was made when the duchess was thirty-three years old, captures the moment when she attempts to frighten her elderly maid, Rafaela Luisa Velázquez, with a small red object. The old woman wards her off with the crucifix she holds in her hand. The maid was known as "the Sanctimonious" ("la Beata") thanks to her piety and devotion to prayer, which also seem to have made her the target of many jokes at the palace. In this work, Goya achieves an unusual, intimate portrait of the Duchess of Alba which manages to capture something of her rather irreverent character.

In terms of its style and subject matter, this portrait can be considered a prelude to the so-called Sanlúcar Album, Album A, which Goya made in 1796 during his stay in Cádiz. The Duchess of Alba and "the Sanctimonious" anticipates some of the stylistic characteristics of those drawings, as well as the importance they give to the human figure and the total absence of any description of the surrounding space.