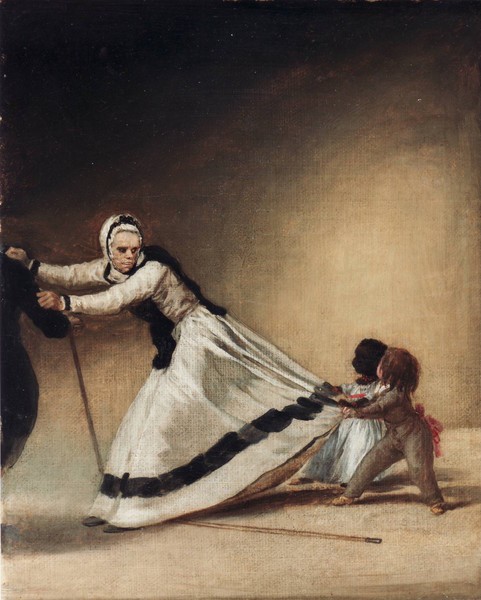 This work, which forms a pair with The Duchess of Alba and "the Sanctimonious", gives a glimpse into everyday life at the Palace of Buenavista in Madrid. Here we see the Duchess of Alba's maid, Rafaela Luisa Velázquez, made into the unwilling object of a game played by two children, who are pulling at her skirt. She is forced to hold on to a fourth person, of whom only an arm is visible, to stop herself from falling over. The two children could be Luis de Berganza, the son of the palace's administrator, and a little black girl who is also known to have lived there.

To paint these two scenes, Goya was given access to the private sections of the Palace of Buenavista, just as he tells us in a letter he wrote to his friend Martín Zapater in 1794, now in the Prado Museum, in which he says: "You had better come to help me paint the [Duchess] of Alba, who barged into the studio yesterday to have her face painted by me, and she got her way; I certainly prefer this to painting on canvas, and I will also have to paint her full-length...".

The figures are arranged in front of a neutral, ochre-coloured background, to which they are connected only by their shadows. This device, which had already been employed by Diego Velázquez (Seville, 1599-Madrid, 1660) in Pablo de Valladolid (1633, Prado Museum, Madrid), was later to be used by Édouard Manet (Paris, 1832-Paris, 1883) in The Fifer (1866, Musée d'Orsay, Paris).