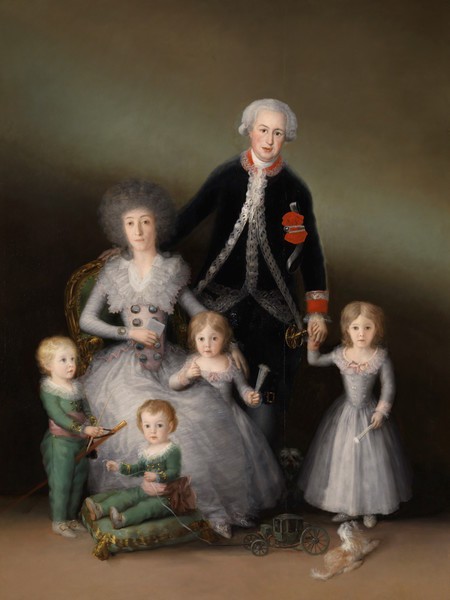 This canvas remained in the Casa de Osuna household until 1896. It was donated by the family to the Prado Museum in 1897.

The Duke and Duchess of Osuna were a couple with a keen interest in the arts and culture. The duke was president of the Royal Economic Society of Madrid, of which his wife was also a member. The Spanish Royal Academy named the Duke of Osuna an honorary member in 1787, and then a full member in 1793. The family's home was often the meeting place for intellectuals and artists, including such characters as Moratín, Tomás Iriarte, Ramón de la Cruz and, of course, Goya.

This portrait depicts Don Pedro de Alcántara Téllez Girón y Pacheco, Marquis of Peñafiel, IX Duke of Osuna, with his wife, Doña María Josefa Alonso Pimentel y Borja, Countess and Duchess of Benavente, and their four children: on the left, Francisco de Borja, who would later become the X Duke of Osuna; sitting on a cushion, Pedro de Alcántara, later one of the Prado Museum's first directors, along with his mother; Joaquina, Marchioness of Santa Cruz; and, holding her father's hand, the first-born, Josefa Manuela, the future Duchess of Abrantes.

The Duke and Duchess of Osuna were among Goya's best patrons. As well as this portrait, they commissioned several cabinet paintings including the seven paintings of countryside themes and the six scenes of witchcraft for their property of La Alameda, which the duchess hung in her cabinet there. They also commissioned the artist to paint the portraits of the monarchs Charles IV and María Luisa to mark their coronation.

This family portrait was one of the best that Goya ever painted.

The painter's affection for this family can be seen in the careful way he has painted their faces, especially those of the children. The figures stand out against a dark, neutral background, except for the Duke, who appears in a more brightly lit area. The colours are very uniform; the girls and the mother wear matching dresses and the boys, at play, are also dressed in matching suits of the same green colour, with pink sashes. The only figure who stands apart is Don Pedro, who is wearing a dark dress coat with bold dashes of red.

Sánchez Cantón points out that this is the first time that the influence of English art, and of Gainsborough in particular, can be seen in one of Goya's compositions.

On 16 October 1788, Goya presented the bill for this painting and the portraits of Charles IV and María Luisa. In total the three works cost 16,000 reales.