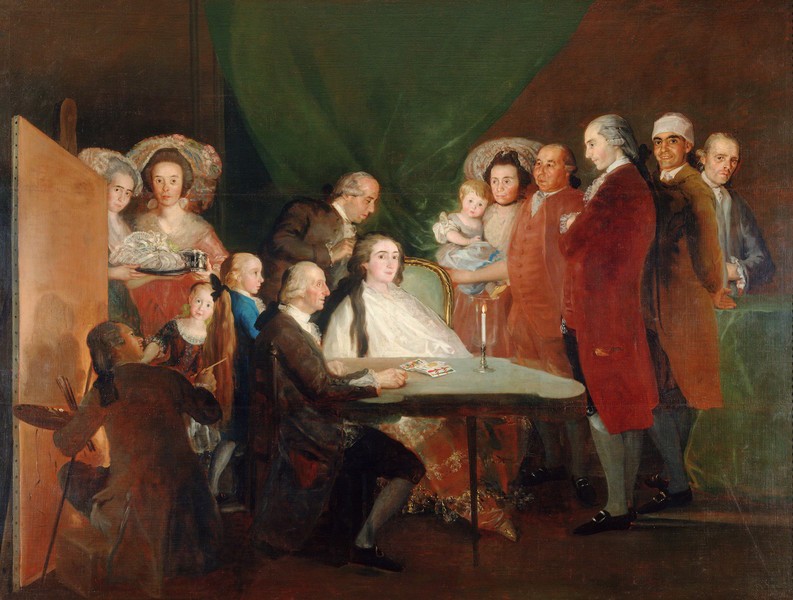 This canvas went from the collection of the Infante Don Luis, in Arenas de San Pedro (Ávila), to that of his daughter, María Teresa de Bourbon y Vallabriga, in Boadilla del Monte (Madrid), in 1820. From there it was left to her daughter, Carlota Luisa de Godoy y Bourbon, who married the Roman prince Camillo Ruspoli. When Carlota Luisa died, in 1886, the painting went to the Ruspoli family and in 1904 was taken to their palace in Florence. In 1974 it was acquired by Luigi Magnani.

The canvas was painted during Goya's second stay in Arenas de San Pedro (Ávila), this time accompanied by his wife, Josefa Bayeu, between June and October of 1784. A letter from the painter to his close friend Martín Zapater dated 20 September 1783 tells us of his first stay there and of his good relations with Luis de Bourbon.

This was the first large composition tackled by Goya, a large-scale group portrait, seventeen years before he was to paint the one of the family of Charles IV.

María Teresa de Vallabriga is shown seated in the centre of the composition, wearing a striking white peignoir and looking straight out at the viewer whilst her hairdresser, Santos Gracia, arranges her hair. In front of her is a table on which her husband, the Infante Don Luis de Bourbon, shown in sharp profile, is playing cards. To the left of the composition are the couple's two children, the Infante Don Luis and Doña María Teresa, the future Countess of Chinchón. Behind the children stand two maids, Antonia de Vanderbrocht and Petronila de Valdearenas, holding a headdress and a box of scented essences. In the bottom left-hand corner, crouched down and in the shadow, we see Goya himself, painting at a large canvas shown in sharp perspective.

To the right of the infanta, and arranged as in a frieze, from left to right, are, according to the most widely accepted interpretation: the nanny, Isidra Fuentes, with the young María Luisa in her arms; Manuel Moreno de las Heras, the most heavily-built of all those depicted and an officer in the infante's secretariat; Gregorio Ruiz de Arce, butler, or possibly Estanislao de Lugo y Molina, Luis María's tutor, or the cellist and composer Luigi Boccherini; Francisco del Campo, María Teresa's private secretary and the person who introduced Goya to Don Luis' circle; and Alejandro de la Cruz, Court Painter to the king. The background of this family and court reunion is provided by some large, half-drawn curtains, of a deep green colour.

A copy of this work exists in the collection of the Duke and Duchess of Sueca.