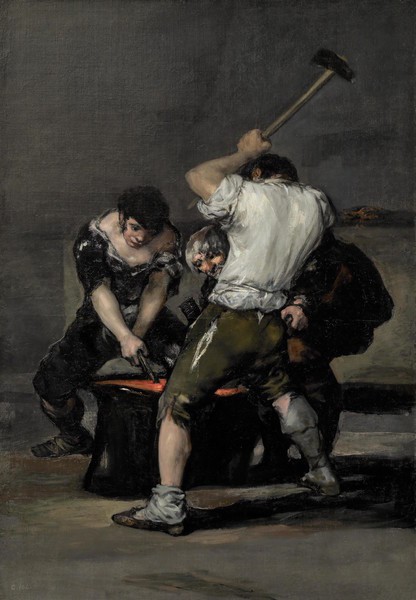 The work belonged to Javier Goya and was acquired by Baron Taylor for the Spanish Gallery of Louis-Philippe I of Orleans. The painting was then sold at Christie's of London in 1853 for the sum of 10 pounds. It belonged to Henry Clay Frick, the founder of the collection of which it forms a part today.

This genre painting depicts three men working in a forge, gathered around a fire. One of them has his back to the viewer, with his arms raised, brandishing a hammer as he prepares to strike the red hot plate on the anvil. A second man faces the viewer, while the third, older than the other two, seems to be carrying out a task requiring less physical effort. The attitudes of the bodies in tension and the violent movements they make give the scene great realism. Goya probably had the chance to observe similar scenes in the flesh which allowed him to capture this realism. In fact, there is a drawing in Album F with the same composition which may have been a study from life. The workers' attire contributes to the heightened drama, revealing the figures' muscular arms and chests, and denoting the suffocating heat which was associated with this kind of work.

Goya uses quite a dark palette for this work, and the use of black presages the artistic style of the artist's final years.