The Junta of the Philippines (La Junta de Filipinas) 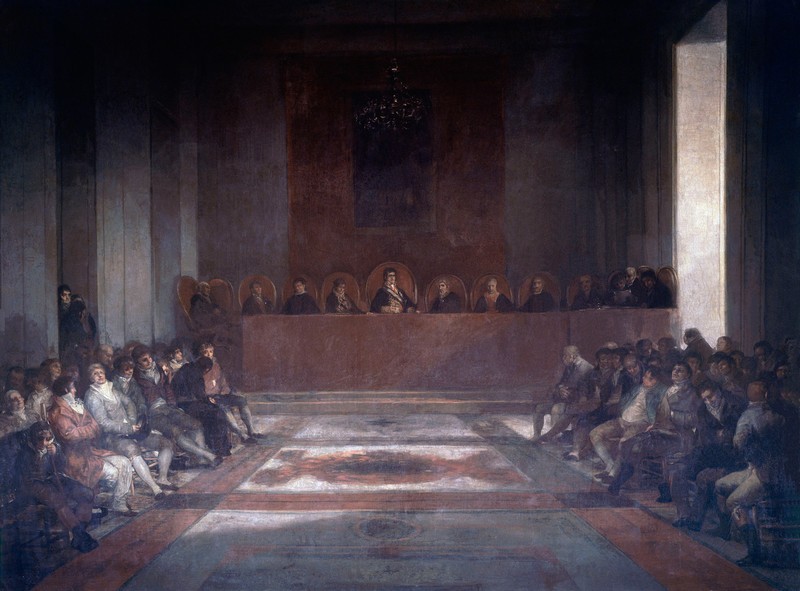 The Royal Company of the Philippines was an association of shareholders founded in 1785 at the initiative of Francisco Cabarrús and under the mandate of Charles III. It ceased trading in 1829, following the fall of the Spanish Colonial Empire, and it was dissolved in 1834. On 30 March 1815, a important meeting of the Company was held in Madrid, personally attended by Ferdinand VII himself. In late April, the Junta requested permission to immortalize this event with the creation of a commemorative painting. The job was given to Goya, who had already painted portraits of three of the shareholders earlier in the year, including the Ministry of the Indies, Miguel de Lardizábal, and his friend Munárriz, who that very same year had renounced his post as director of the Academy of San Fernando in order to serve as Secretary of the Company. Plus, Goya's son's father-in-law, Miguel Martín de Goicoechea, was an important shareholder, and was able to intervene in the painter's favour.

Thanks to the visit that the Swedish ambassador, La Gardie, made to Goya's studio, we know that the work was in progress on 2 July 1815. It was finished in September of that same year.

Between 1829 and 1881, the painting disappeared. It is thought that it was given over to the corporation of the Five Major Guilds, turning up later in the collection of Don Ángel María Teradillos, in Madrid. The painter Marcel Briguiboul, who had studied in Spain, bought it from José Antonio Teradillos, in Madrid, on 7 May 1881. He paid the sum of 35,000 reales for it. Whilst in the city, Briguiboul purchased two more works by Goya: the portrait of Francisco del Mazo and the Self-Portrait wearing Glasses. The French artist's son, Pierre Briguiboul, bequeathed these paintings, together with other pieces from his collection to the Goya Museum in Castres in 1893-1894.

This commemorative painting is in fact a huge group portrait. The assembly took place in a grand hall, presided over by Ferdinand VII. At the far end is the presidential table with the directors of the Junta, who must have been arranged differently for this particular meeting due to the presence of the king. Ferdinand VII occupied the central seat. Goya has depicted him in a very rigid posture, giving him an authoritative, domineering appearance. He is easy to recognise thanks to his royal dress and the sash of the Order of Carlos III. According to the minutes of the meeting, sitting to the king's right would have been the president of the Junta, Miguel de Lardizábal, but the figure shown in that position in the painting does not resemble the Mexican. In fact, owing to the uncomfortable conflict that arose around Lardizábal before the painting was finished, Goya had to change his position within the painting. The minister, a well-known absolutist and strong supporter of Ferdinand VII, was nevertheless exiled by the king, accused of favouring the interests of his native Mexico, and his ministry was dissolved. Goya placed Lardizábal in a more discreet position within the meeting, hidden behind the door frame on the left-hand side. We find an allusion to this unfair punishment in the painter's individual portrait of Miguel de Lardizábal, in which the letter that the sitter holds seems to make reference to his forced exile. It has also been suggested that the empty chair at the far left of the table could symbolize Lardizábal's absence, or perhaps the vacant posts that were to be filled during the course of the session. We cannot be certain who is shown seated to the right of the king. Perhaps it is Munárriz, who was present at the meeting and who, as secretary of the Company, was the person responsible for reading the speeches and reports. We can say for sure, however, that the figure seated to the left of the king was the vice-president, Ignacio Omulryan, who was also painted individually by Goya.

At the sides of the painting, facing each other across the hall, are the attendees in their seats. The composition - which is of considerable dimensions even though it is not the largest of Goya's works, this honour going to the tapestry cartoon The Threshing Floor - is a very simple one. At its centre is the figure of Ferdinand VII, who is sitting in the vanishing point. Given that the painting's structure leaves a large empty space in the middle, Goya has made a feature of the heavy atmosphere of the room, through the quality of the light and its reflections in different areas of the canvas, particularly on the floor. The realism with which Goya renders the hall allows the viewer to perceive the thick, stale air of a room that would have held a large number of people during a prolonged period of time.

The light also has another function in the painting: that of highlighting the meeting's most important figures. It floods in through the large window on the right-hand side, leaving a large part of the hall in the shadow, just like the lighting in Velázquez's Las Meninas. However, it illuminates the figure of the king, the face of Lardizábal in the doorway, and some of those in attendance, emphasizing their presence over that of the others.

Many scholars have written about the postures of these figures and the general tiredness that can be appreciated in the scene, as if the session had gone on for too long. In this predisposition of the shareholders, some have seen a veiled criticism of the power of the absolutist monarchy and the repression that Ferdinand VII's return to the throne supposed. Goya has painted those present in postures and poses that are far from respectful towards the kings. Some are turning their back to the monarch whilst others are chatting amongst themselves or looking elsewhere, such as those already mentioned, sitting on the left-hand side.

It is perhaps due to this very clear visual murmuring, or because of the inscription on Lardizábal's individual portrait, that this work "disappeared" from the official collections and ended up in the possession of a private collector. Apart from the British caricaturists of the period, nobody had previously dared to criticize the power of the king, and especially not in a historical painting.