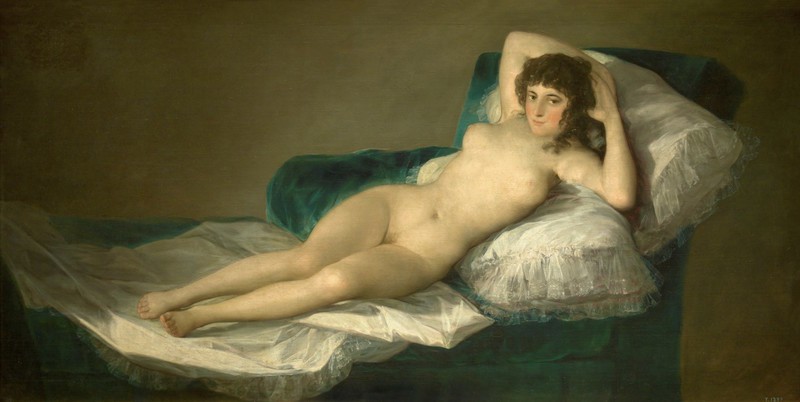 This work formed part of Manuel Godoy's art collection. Following the Aranjuez uprising of 1808 and the abdication of King Charles IV that same year, the work was seized, along with other items, by order of Ferdinand VII. Between 1808 and 1813 it was stored, together with The Clothed Maja, at the Royal Academy of Fine Arts of San Fernando and in 1813 it was confiscated by the Inquisition. It was kept at the Madrid academy from 1836 until 1901, when it entered the collection of the Prado Museum, being mentioned in the museum's catalogue for the first time in 1910.

The first reference we have to The Nude Maja dates back to 1800, when it is mentioned as being in Manuel Godoy's palace, where it was hung above a doorway. No mention is made of The Clothed Maja, however, suggesting that at that time it had not yet been painted. In 1808 the present work appears once more in the inventory that Fréderic Quilliet, an agent of Joseph Bonaparte, made of Godoy's estate.

The Nude Maja is paired with The Clothed Maja, since the two works were probably commissioned by Manuel Godoy, the prime minister of King Charles IV. This would not have been the first painting of a female nude in Godoy's collection. His private study also contained The Toilet of Venus (La Venus del Espejo) (1647-1651, National Gallery, London) by Velázquez, and a copy of another Venus by Titian.

The identity of the woman posing for Goya in this painting remains a mystery although it has been suggested that it could be either the Duchess of Alba or alternatively Pepita Tudó, Godoy's lover from 1797 onwards.

The theme of the female nude has few precedents in the history of Spanish art, perhaps because it was considered to be an obscene subject matter. One only has to consider that, whilst in the academies of the period it was relatively common to copy from nude male models, the nude female body was instead studied by looking at classical sculpture or existing paintings, and never from life.

This vision of the female anatomy that Goya depicts so freely in The Nude Maja resulted in the painter being investigated by the Inquisition. On 16 March 1815, the Secret Chamber of the Inquisition of Madrid ordered, in reference to the two majas, that "said Goya be brought before this tribunal so that he might recognize them and declare whether they are his work, for what reason he made them, by commission for whom, and what ends were intended". Unfortunately we do not know what happened in the course of this process nor do we have any evidence of the statements that Goya made, which would have served to shed some light on the episode.

The woman, entirely naked, is shown in the same position as in The Clothed Maja, reclining on a green divan covered by a white bedspread and pillows. According to Xavier de Salas, the two majas were not painted at the same time, owing, in part at least, to the technical differences between the two works. In his opinion, The Clothed Maja was painted after the nude. In reality, the explanation for these technical differences stems from the need Goya felt to tackle these two works according to different criteria. So as to enjoy rendering the fabrics in The Clothed Maja, the painter used looser, freer brushstrokes to better capture the different qualities of the materials that cover the woman's body. However, the anatomical representation of The Nude Maja resulted in the adoption of a more academic vision for the work, in which draughtsmanship took on greater importance.

When making this painting, Goya may have referred to works such as Velázquez's The Toilet of Venus, Titian's The Venus of Urbino (1538, Uffizi Gallery, Florence) or Venus with the Organist, by the same artist (Ca. 1550, Prado Museum, Madrid). He may even have seen Female Nude seen from Behind (Ca. 1739, Galleria Nazionale d'Arte Antica Palazzo Barberini, Rome) by Pierre-Hubert Subleyras (Saint-Gilles-du-Gard, 1699-Rome, 1749).