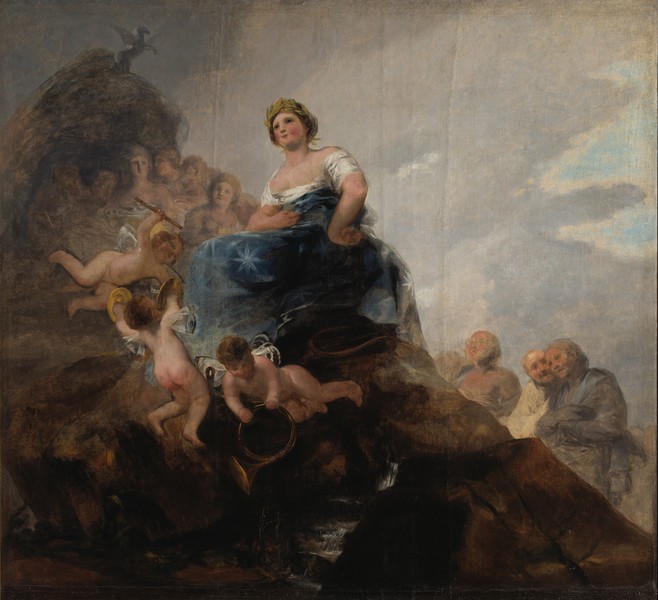 We know nothing of the circumstances surrounding the commissioning of this work and the painting with which it is usually linked, Truth, Time and History. One theory is that both were painted between 1804 and 1806, destined to decorate the palace given to Godoy as a gift on his appointment as Prime Minister in 1792, but the differences in format and the possible interpretations of the supposed companion painting indicate that they cannot be considered to be a pair, although they have shared the same journey through various collections since at least 1867.

In or before 1834, both works were acquired by the Consul-General of the Russian Empire in Cádiz, Alexandre Gessler, for the collections of the Tsar Nicolas I. Gessler sent the paintings to Russia in 1834, attaching a note in which he declared that they had belonged to Manuel Godoy. The works were returned, presumably during the following year, having been rejected by the Tsar's artistic advisors. This rejection must have left Gessler in a bad financial situation, and he perhaps pressured his brother-in-law, the ex-general-consul of Austria, Juan Duncan Shaw, to buy the pair of paintings from him. In 1867 Yriarte mentions the paintings, at which point they were indeed in the collection of Mr Shaw. On his death in 1878 they were inherited by his descendents. In 1900 they were located in the collection of Mr Luis de Navas in Madrid, and later belonged to the collection of Charles Deering of Chicago, who had a residence in Sitges (Barcelona) where they could be viewed. They moved to Chicago under the same ownership. When Mr Deering died, they were acquired by the New York company E. and A. Silberman, and in 1961 they were acquired by the National Museum of Fine Arts in Stockholm.

If it is true that these works were designed for Godoy's palace, they would probably have been hung in the library. This kind of allegorical work with strong propagandist elements would have been favourable to the Prime Minister's image, making him seem to be an enlightened protector of the arts and sciences.

As pointed out by Soria and Sánchez Cantón, this allegory follows the iconography laid down by Cesare Ripa, whose work was always taken into account by Goya when he depicted allegorical themes. According to Ripa, Poetry should be depicted as a beautiful woman baring her chest, crowned with laurel, and dressed in sky blue with many stars adorning her attire. She should be seated on Mount Parnassus and accompanied by the nine Muses. Three putti fly around her, carrying musical instruments (a horn, cymbals, and a flute) which symbolize the different branches of poetry. The confusion over the meaning of this painting is understandable, and it was considered for years to be the apotheosis of Music.

Goya has faithfully respected this description, and so we are presented this impressive woman, whose silhouette juts out, monumental, against the sky. The rocks upon which she sits trace a diagonal line which divides the composition into two parts. We can see three figures on the lower left-hand side of the picture which represent the three great poets of history: Homer (the blind man on the left) and two others, dressed in white and grey respectively, which may be Virgil and Dante, Ovid, or Horace. Goya even took into account the source of eternal poetic inspiration or Hippocrene, whose waters flowed down the mountain at Poetry's feet. On the summit of Mount Parnassus, a small figure of Pegasus prepares to take flight, symbol of the importance of the imagination.

Similarities have been noted between this work and the frescoes of the Chapel of San Antonio de la Florida in Madrid in terms of the atmospheric qualities, the blue of the surrounding sky, and the brushwork. In fact, Rita de Angelis claims (although not without caution), this work might well have been destined to be hung in the ceiling, and Gudiol agrees that its correct appreciation would indeed be best carried out from below. At the end of the 18th century, many allegorical compositions were hung high on ceilings, such as Bayeu's works for the Royal Palace in Madrid.