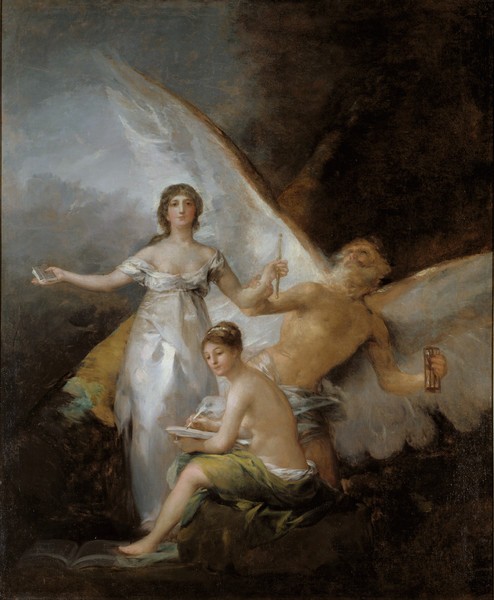 According to traditional interpretations of this work, Goya painted it as a companion to Poetry, perhaps to decorate Godoy's palace in Madrid, dating both works at around 1804-05. However, more recent theories consider this to be an allegory of the Constitution of 1812, which would mean that it was produced at a later date. The only certainty is that the two have been linked by a common journey since 1867, as reflected in the history of its supposed companion work.

This painting has been the subject of various interpretations over the years. We have chosen to give it the longer title from its bibliography, which is that afforded to it by the National Museum of Fine Arts of Stockholm.

The composition features three figures: an old man with great wings carrying an hourglass in his hands, a beautiful young woman in a simple white dress who is carrying a small book in her right hand and a sceptre in her left, and a second, half-dressed woman in a very revealing green dress who is sitting on a rock half turned towards the viewer while she writes in a large book.

When the work was on show in the 1900 exhibition it was entitled Time Showing Spain to History. Some years before, in 1867, Yriarte identified the young woman in white as representing the nation, as did many other authors who shortened the title to Spain, Time, and History. According to these authors, Spain is lead by the wrist by Saturn or Chronos, who can be identified by the hourglass he carries. The other woman who is sat writing would be History. Dressed in green and looking over her shoulder with a faraway expression, she remembers all the events she has seen, and is a witness to this meeting between the other two characters. The iconography of this interpretation was explored by Martín Soria in 1948, who linked it to Cesare Ripa's Iconologia. He commented that both this work and Poetry, which he considered beyond doubt to be a pair, also concealed political satire against Manuel Godoy. Sayre cautiously says that this theory should be ruled out due to a lack of proof backing up the idea of these works as having been created as a pair.

This first theory which identifies the woman in white as an incarnation of Spain is not convincing if we take traditional representations of that country into account. Spain was normally shown as a woman on a throne wearing a crown and accompanied by lions, castles, or the legendary Pillars of Hercules. None of these details appear in this work. The sceptre and the book are attributes which led Nordström to link this painting to Ripa's depiction of Philosophy, while Soria considered the figure to be Spain based on Ripa's model of Tuscany, who carries the same items. Nordström's bet, Philosophy, was usually depicted as a woman carrying three closed books symbolizing the three philosophical disciplines, and a sceptre representing the dominion of all human sciences. She is dressed in sumptuous attire alluding to the richness of scientific knowledge, while her pose suggests modesty and serenity. Leaving aside the extravagant clothing, this interpretation is closer to what we see in the painting itself, although Sayre believes that the joy contained in the painting which Goya wished to transmit must hold a meaning more personal to the artist, adding that whoever commissioned the work (since Goya would not have painted it for himself) would have wanted the personality of the woman in question to be very clear.

The third interpretation of this work refers to the Liberal Constitution of 1812. The beautiful woman in white would be a personification of this law, represented by the small book she holds. The illumination in the painting which comes from the upper left-hand corner falls directly onto this figure, and she receives it, arms outstretched, while she is sheltered from the darkness by Chronos and his protective wings. The hourglass he holds contains all the sand in the top half, as if it had just been turned over, indicating the commencement of a new era. In Spain, small volumes were printed containing the constitutional texts not only of 1812 but also the other two constitutions witnessed by Goya - those of 1808 and 1820 - as Sánchez Cantón reminds us. Sayre analyses the historical context of each, reaching the conclusion that this painting represents the Constitution of 1812 based on some of its provisions, such as the abolition of the Inquisition and the suspension of certain monastic laws. The Spanish liberal middle classes' support for the constitution and the fact that this was not the only time Goya dealt with the theme of the 1812 Constitution in his work (see Lux ex Tenebris) give weight to his conclusions.