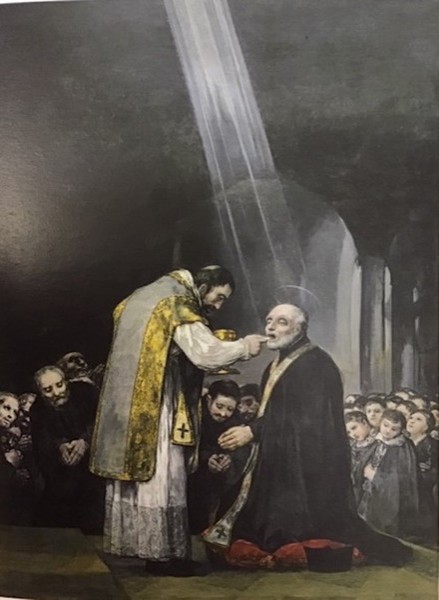 On 9 May the Scolopi fathers of the School of San Antón commissioned Goya to produce a painting of Saint Joseph of Calasanz. On 27 August of 1819 the painting was revealed, placed over one of the side altars of the church. Later it was moved to the museum devoted to Calasanz in Madrid.

Of the total price of 16,000 reales, Goya received an advance of 8,000 reales. But when he received the second payment on completion, he decided to keep only 1,200 reales, returning 6,800 to the church as an offering to the saint, who was from his region. There is a theory that Goya would have studied for primary school with the Scolopi order in Zaragoza, and this would explain why he felt a personal attachment to this commission. Shortly after this, the artist also sent the order another work by way of a second offering, Jesus in the Olive Grove.

We do not know why the Scolopi fathers commissioned this work to Goya, although links with them could have been established through one of his friends such as Moratín or Ceán Bermúdez.

The scene depicted in this work took place in 1648, the year in which the founder of the Pious Schools, Saint Joseph of Calasanz, died. Here he is shown kneeling to receive communion with his hands together in prayer, a feverous expression on his aged face. Behind the saint and the priest there is a series of figures, arranged horizontally, made up of young pupils and adults awaiting their turn to take communion. We know which church they are in thanks to the arcade on the right, although the background is black and neutral, only broken up by the ray of light which falls on the saint.

Camón points out that this work is in line with a trend in Goya's work since the Spanish War of Independence towards the use of dark hues combined with chalky white tones, golden yellows and pinks, as in the case of Saints Justa and Rufina in Seville Cathedral.

The artist perfectly captures the great peace of a soul in the shadow of death, as Gassier and Wilson put it. The work has a great spiritual intensity, the colour scheme contributing to immortalizing the solemn moment of communion. Particularly noteworthy are the impasto technique used on the priest's clothing and the strong contrast between the darkness which dominates the canvas and the illuminated areas, especially the face of Saint Joseph. The result is a powerful, original canvas, product of a talented artist who, at 73 years old, had a huge experience in his profession.