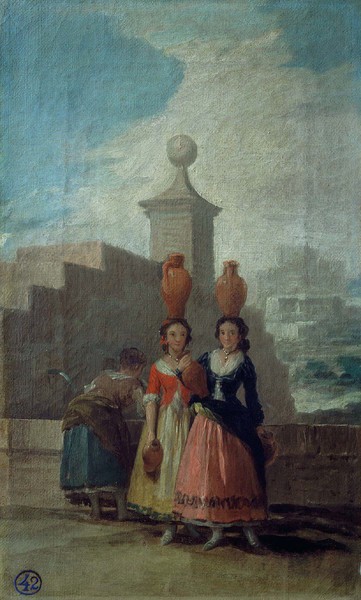 Sketch for the tapestry cartoon Young Women with Pitchers.

Standing next to a fountain, two girls each balance a pitcher on their heads whilst looking attentively towards someone outside the frame of the painting, aware of the desires they provoke, whilst a third girl crouches down with her back to the viewer to fill another pitcher. They are in a rural setting, with a low wall behind them, separating them from the fields in the background. The architectural detail in the fountain, crowned with a sphere like those found on the palace of El Escorial, is of particular interest.

We can appreciate some important differences between this sketch and the finished cartoon. Goya tried to lighten the composition by simplifying the fountain and putting more emphasis on the profile of the water carriers, who stand out sharply against the sky in the cartoon, especially the girl on the right-hand side, who also adopts a more sinuous posture due to the weight of the pitchers she is carrying. The woman shown here collecting water later appears standing next to the other two, and there is no child present in the sketch. As such, the figures of the girls do not appear as slim and the overall impression is much flatter, since the inclusion of the boy adds further depth to the cartoon.

The inscription on the back of the canvas was discovered by Juliet Wilson. It undoubtedly means that the painting had been awarded to Xavier Goya in the inventory carried out in 1812 following the death of Josefa Bayeu. This number usually corresponded to two works, The Water Carrier and The Knife Grinder, now in Budapest. This was due to the fact that Goya's heirs reused the numbers given to works once they had been sold.

The bare red preparation is visible in a 7 mm strip around the edge of the canvas.