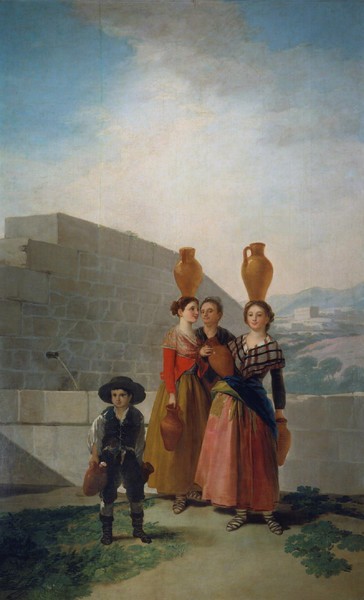 One of a pair of identically sized stretchers that appear on the invoice of the carpenter Alejandro Cittadini was set aside for Young Women with Pitchers. The other stretcher was for the companion piece, The Straw Manikin.

Two girls have just filled some pitchers at the fountain behind them. They each carry one pitcher carefully balanced on their heads and hold the others in their arms. Between them we see an older woman who has been identified as the celestina, or procuress, who is giving some advice to the girl on the left, almost certainly because someone has shown an interest in her. Accompanying the women is a boy wearing a hat and carrying two smaller pitchers in his hands. The figures stand in a rural landscape featuring some architectural elements. In the background are fields and a small mountain range. The ashlars of the wall are very similar to those that we find in the cartoon of The Wedding, which would probably have been flanked by this piece on one side and by The Straw Manikin on the other.

Observing the wall it is just possible to make out an underlying figure over which Goya painted the blocks. This was the third woman, who was filling the pitchers, just as she appears in the sketch. In an x-ray of the painting she is clearly visible.

The interpretation of this painting is closely tied to the other two works mentioned above. If The Wedding is the representation of a marriage of convenience in which the woman says "I do" but then takes anyone by the hand, and The Straw Manikin symbolizes man falling into the hands of woman, Young Women with Pitchers would depict the tempting of man before his fall into the traps set for him by women. This is a theme that Goya was to return to, and which reached its fullest expression in his Caprices series.