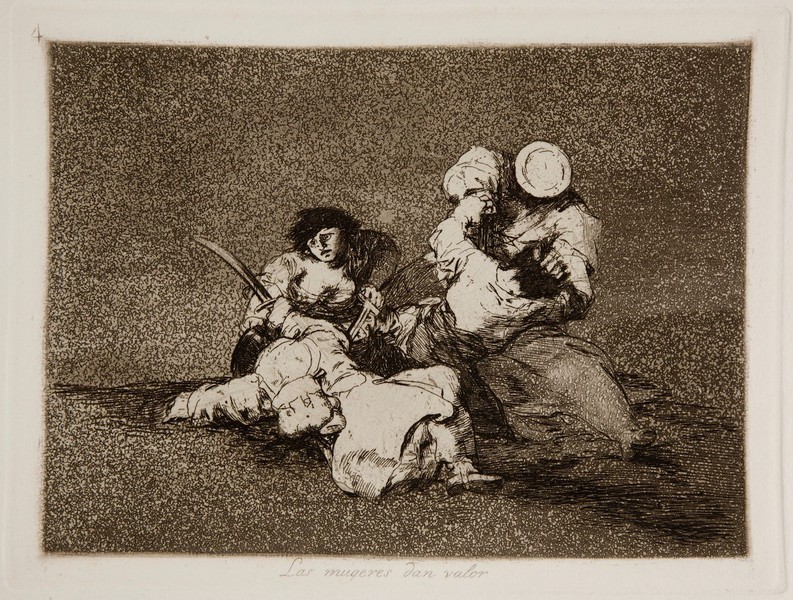 There exists a state proof in which lavis and aquatint were added right up to the edges, and drypoint was used to retouch the woman's left cheek. No state proof with just the engraved number 34 has been conserved, but another state proof, featuring both that number and the number 4, has survived.

In the centre of the scene a French soldier grapples with a woman, pulling her violently by the hair. Next to this pair, another female figure fights with a second French soldier lying on the ground, whom she has just stabbed with a sword. The bold dynamism of this image is achieved through the use of diagonal lines in the composition, giving a sensation of instability to the figures. This same device has been used in many other prints in the Disasters of War series.

Aquatint has been applied over the whole of the background, as well as on the ground. The result is a grainy effect that, on the one hand, cancels out any spatial references whilst at the same time creating an oppressively dark atmosphere that heightens the sinister character of the scene.

There are several images in which Goya speaks of the decisive role played by women in war. Victims of rape and assault, they find themselves in circumstances in which they are forced to defend themselves in any way possible. This print is related to no. 5, And are like wild beasts, which appears to conclude the narration being told here in print no. 4, or to add emphasis to it.

The etching plate is conserved in the National Chalcography Museum (cat. 255).