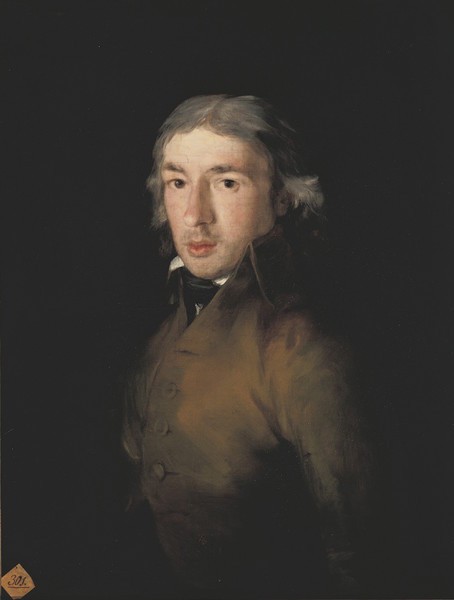 The note that Moratín wrote in his diary for the 16th July 1799 ("To Goya's house: portrait") referred to one of the sessions in which he posed for this painting.

It came from the collection of Doña Francisca Muñoz Ortez, to whom the sitter gave it as a gift in 1817. It was bequeathed to the Royal Academy of Fine Arts of San Fernando in 1827.

Leandro Fernández de Moratín (Madrid, 1760-Paris, 1828) was the most important Spanish dramatist of the 19th century. His father, Nicolás Fernandez de Moratín, was also a dramatist and a poet. Chosen as Cabarrús's secretary, he travelled to several different European countries, and especially to France, a country which he came to know well and, like many of his ilustrado friends, became a Francophile. In France they saw a model to imitate in order to solve the problems of poverty and cultural backwardness that Spain was suffering. For his support of the French he was eventually sent into exile to France, where he died. He wrote poetry, odes, sonnets and romances, but he was best known as a playwright, writing famous plays such as the comedy The Maidens' Consent (El sí de las niñas). There exist numerous accounts of his friendship with Goya.

Here, he is shown in front of a dark background, a characteristic trait of so many of Goya's portraits. The scene is lit by a powerful source of light which falls directly on his forehead and cheekbones, revealing to us an alert, intelligent and somewhat reserved character. He is wearing a dark brown jacket, which adds even more chiaroscuro contrast to the composition.

Goya later painted another portrait of Moratín when both men were living in exile in Bordeaux.