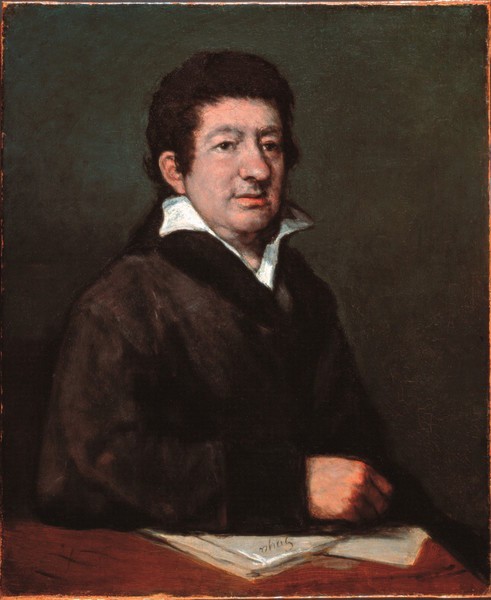 Goya (written backwards, on the papers on top of the desk).

Goya painted this portrait in Bordeaux. We are able to deduce the chronology thanks to a letter dated 10 September 1824, sent by Moratín to his close friend, the clergyman and writer Juan Antonio Melón, in which he jokes about the close resemblance, and that the artist wished to "make copies" of him.

The portrait belonged to the collection of Manuel Silvela.

Leandro Nicolás Fernández de Moratín (see biographical information in Moratin) is painted here by his good friend Goya for the second time, when they were both in exile from Spain. Thanks to the letters that the playwright sent to Melón, we know a lot about the last years of Goya's life, spent in Bordeaux.

In this second portrait, we see Moratín depicted frankly, as a man of advancing years, without idealization. His features are no longer as strong as they are in the portrait of the Academy of San Fernando; in fact it would be hard to recognize him as the same man if his friendly face did not give him away. This is no longer a portrait of a young successful writer, but rather that of a friend known for many years, in which sentiment predominates. Moratín has now reached both physical and intellectual maturity, as his knowing look reveals.

In the informal dressing gown that the poet is shown wearing, Goya employed dark tones. His neck is also without a tie, instead being simply framed by the intense white of his shirt collar. That bright white and the pink of his face contrast with the work's background, painted in an unusual bluish green colour. Moratín is shown writing on some pieces of paper, which Goya has taken advantage of to insert his signature. The portrait has a very special expressiveness, reminiscent of modern art, provoked by the marked contours of the figure and the flat application of the background colour, without any perspective.