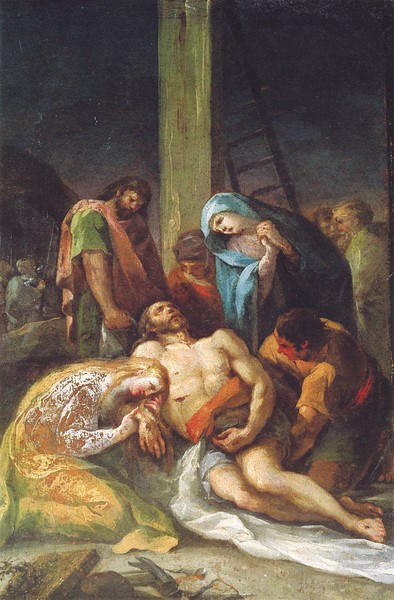 According to Guidol, this painting came from a family from Fuendetodos (Zaragoza). It later belonged to the Simonsen Collection in Sao Paulo, and is currently part of a private collection in Switzerland.

This work was recorded by Gudiol. It shares its provenance and history with that of the painting Rest on the Flight to Egypt, and it has occasionally been suggested that the two paintings form a pair. However, it is clear that they are not in fact a pair, as confirmed by the difference in supports. The fact that this work was painted on paper may indicate that it was a preparatory sketch or study for a larger work.

The image depicts the descent of Christ from the cross surrounded by the typical characters featured in this scene: the dead Christ, his mother, Mary Magdalene, Saint John, Nicodemus, and Joseph of Arimathea. There are also other figures, such as a group of soldiers in the background on the left, and a couple of men on the right. The symbols of the Passion are placed in the foreground on the left. The drama of the subject is reflected in the gestures made by the women and the foreshortened posture of the inert body of Christ.

We can observe the influence of Bayeu in the faces of Mary and Saint John. The execution of the group of soldiers, who have been roughly sketched in, is of particular interest. Gudiol has pointed out that each of the characters of the main group is carried out in a different colour range, superimposing layers of colour, and giving the figures a more compact feel, while the sky is painted using glazes over the reddish base. These rococo colours follow in the Giaquinto tradition. The variety of brushstrokes is typical of Goya, who uses many types from the very vigorous to the barely perceptible.