He Deserved It (Lo merecia) 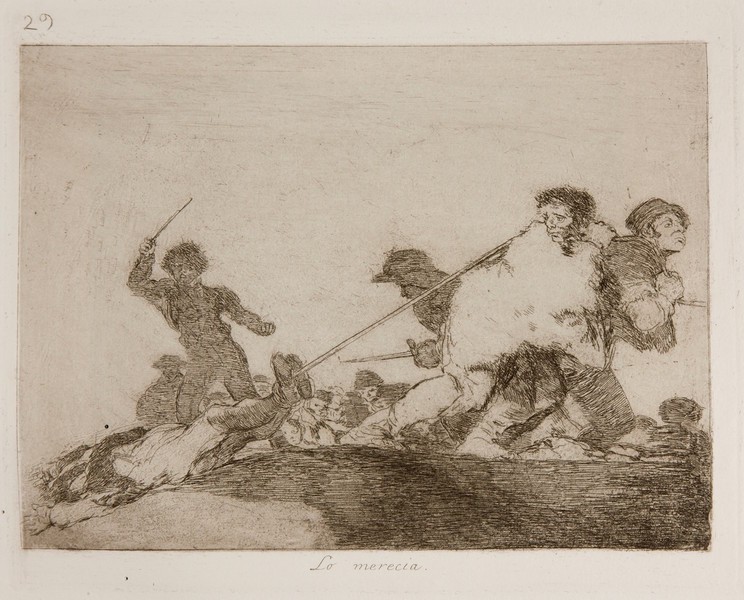 In He Deserved It two men pull a rope attached to a body - possibly a corpse - which is naked from the waist down. Behind them is a fervent crowd led by a man brandishing a rod in his hand.

Goya depicts the faces of the two men pulling the rope in great detail. One of them looks with compassion at the body they are dragging behind them, while the other concentrates on his task with closed eyes, perhaps in an attempt to avoid thinking about the odious task they are carrying out.

This print may continue the story depicted in the previous print in the series, nº 28, Mob (Populacho).If this is the case, the scene continues here with the dragging of the body that was being beaten in front of the mob in the previous print, a crowd that takes pleasure in the macabre spectacle.

Goya composed the scene based on a diagonal line formed by the two men, the rope, and the body. The figures in the background seem to be given a secondary importance: the one closest to the body is shown against the light, making it impossible to see their face. The faces of those following the body in a morbid procession are sketched in a perfunctory manner, giving them the appearance of masks.

The way Goya has represented the figure in the foreground pulling the rope - the figure that looks back at what may be a corpse with a look of anguish - is striking. His body is totally white, a device that could be interpreted as being employed by the painter to highlight the figure's facial expression. Perhaps this figure, wracked by doubt, tries to justify their action by convincing himself that their victim "deserved it".

While it is true to say that this kind of scene must have been very common during the war, in some cases it has been suggested that this image may be linked to the gathering of the bodies of the French soldiers who fell in Zaragoza on 4 August 1808 and were dragged through the city.

The plate is stored in the National Chalcography (cat. 280)