The worst is to beg (Lo peor es pedir) 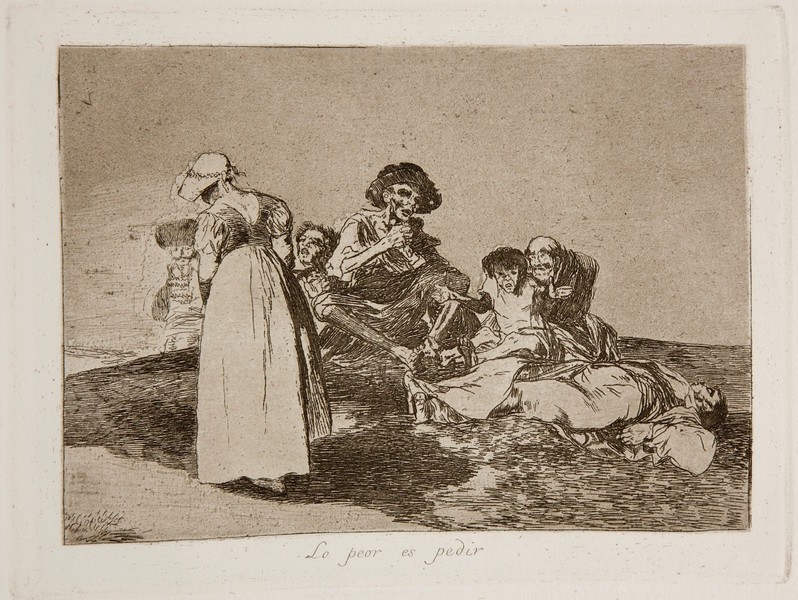 The second artist's proof shows that the lavis extends up to the edges of the plate with light burnishing on the ground area and the sky towards the left-hand edge.

In this print Goya continues to explore the subject of famine begun in print no. 48, A cruel shame! (Cruel lástima). In the middle of a waste ground a group of starving people beg the help of a young woman who passes by them, head lowered. In the background a French officer watches the scene.

Goya has left the sky completely clear, omitting the aquatint he uses for skies in other works. The faces of the starving figures in the centre of the composition are picked out in aquatint. Their faces are gaunt, their eye sockets sunken, while their legs and arms are mere bones and their clothing is ragged.

The well-dressed young woman has been the subject of much discussion. Eleanor Sayre believes that it might be the Spanish wife of the French officer that also appears in the print: a depiction of a mixed marriage. Lecaldano suggests that this figure might be a young middle-class woman who cannot bear the sight of the starving people and for this reason turns her gaze away from them, although he does not link her to the soldier in the background. Jesusa Vega and Juan Carrete raise the possibility that the figure is a prostitute, a profession that offered many women a solution to the difficult circumstances caused by the war. This would explain why the young woman does not look at the dying figures as she passes by, her gaze fixed on the French officer who would represent the best potential client of the time.

The plate is stored in the National Chalcography (cat. 306).