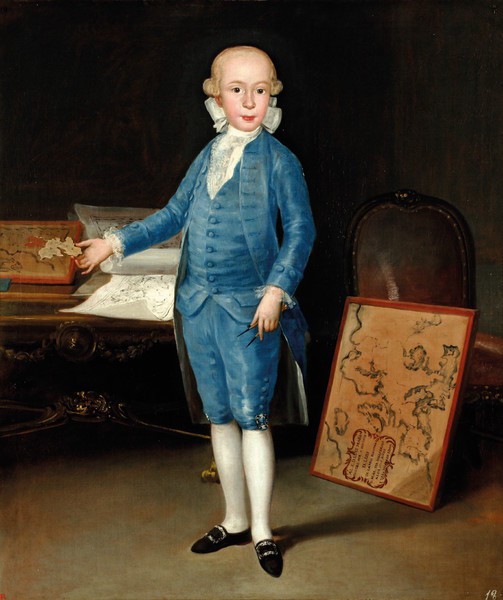 Luis María de Bourbon y Vallabriga (Cadalso de los Vidrios, Madrid, 1777-Madrid, 1823) was the son of the Infante Don Luis de Bourbon, brother of Charles III, and María Teresa de Vallabriga. From an early age he received a careful upbringing and education from great teachers, with whom he studied subjects which included geography, mathematics and natural sciences, as well as music and dance. Later on, his uncle Charles III sent Luis María to study in Toledo under the tutelage of a humanist cleric. There, the boy lived in the archbishop's palace and began to take an interest in the affairs of the Church, finally deciding to become a priest. He reached the rank of Archbishop of Seville in 1799 and was later designated cardinal by Pope Pius VII in 1800.

The portrait depicts the infante at the age of six, in the centre of the composition, inside a room (a study room). He is standing and his body is turned slightly to the right, whilst his head is looking straight out at the viewer. He is wearing court dress, with white shirt and stockings, a waistcoat, dress coat and trousers of a striking Prussian blue (indicating his belonging to a royal family). His clothes are decorated with lace frills at the cuffs and chest, as well as a large bow used to tie back his hair at the back of his neck and buckles both on the trousers and on his red, heeled shoes, a discrete reference to his noble standing. In his right hand he holds a piece of a geographical jigsaw puzzle, whilst with the other he holds a pair of compasses. Behind him and on the right-hand side of the composition are an armchair, against which a framed map of Europe rests, and which bears the inscription shown above. On the other side is a carved table decorated in gold, on top of which are laid out various paper maps and the jigsaw puzzle that the infante is about to finish. The infante's face stands out sharply against the neutral background, and is given even greater presence and a perceived proximity to the viewer thanks to the cold colours of his clothing.

Goya went on to paint Luis María de Bourbon y Vallabriga on two subsequent occasions, full length and dressed as cardinal, these two works today being found in the São Paulo Museum of Art (Brazil) and the Prado Museum, Madrid.

The work formed a pair with another, depicting the subject's sister,María Teresa de Bourbon y Vallabriga, future Countess of Chinchón, in a garden and with a natural landscape in the background (National Gallery of Art, Washington, USA).

The condition of the painting prior to its restoration was reasonably good. However, small losses of material had occurred in the painting over time, affecting different areas of the surface, and caused by the craquelure in the paint layer.

The painting was restored at the Prado Museum in 2006.