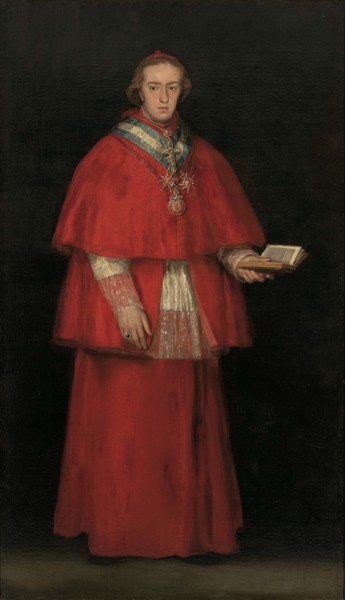 This work came from Boadilla del Monte (Madrid) and belonged to the descendants of the sitter, the Count and Countess of Chinchón. It was later inherited by the Duke and Duchess of Sueca. It travelled to Brazil and was donated to the museum by Orozimbo Roxo Loureiro.

Goya had already painted this same sitter as a child in Arenas de San Pedro (Ávila), and represented him on two occasions following his appointment as cardinal.

This is, therefore, a commemorative, and rather solemn portrait, which shows the subject standing and full length, wearing skullcap and the red habit of cardinal and holding an open missal in his left hand. Around his neck hangs the sash of the Order of Charles III and the cross of the Saint Esprit, both of which decorations were given to him by King Charles IV. The figure stands against a black background, lit from the side.

A replica of this work, with some changes, exists in the Prado Museum and a copy, attributed to Agustín Esteve, can be found in the collection of the Marquis of Casa-Torres.