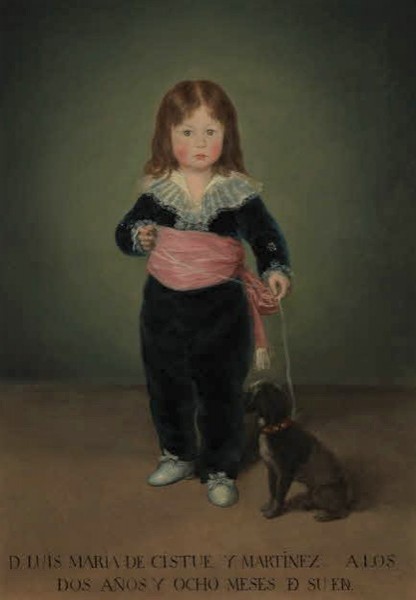 This work belonged to the Cistué family of Zaragoza. It was inherited by Teótimo Cistué y Escudero, V Baron of the Menglana. With the mediation of Duveen Brothers the work travelled to the United States and was acquired by John D. Rockefeller of New York. In the 1980s, John Rockefeller Jr. sold it and it entered the collection of Yves Saint Laurent-Pierre Bergé. In 2009, Pierre Bergé donated it to the Louvre.

Luis María de Cistué (Madrid, 1788-Zaragoza, 1842), was the first son of José de Cistué y Coll and María Josefa Martínez de Ximén, member of Maria Luisa de Parma's chamber. With the death of his father in 1808, he inherited the title of 3rd Baron of the Menglana. At the age of four he received from the king the cross of the Order of Charles III, later embarking upon a meteoric career as both soldier and lawyer. He has a hero of the Spanish War of Independence, fighting alongside General Palafox and obtaining the titles of Colonel and Field Marshall. He was a very cultured man, a member of the Royal Academy of Fine Arts of San Luis, in Zaragoza, and academician of both the Royal Academy of History and the Royal Academy of Fine Arts of San Fernando. He became rector of the University of Zaragoza and was even put in charge of the military district of Aragon.

In this portrait he appears at the tender age of two years and eight months. The full-length portrait shows him dressed in the style of high society children of the time. He wears a blue suit decorated with a pink sash around the waist and a large ribbed collar made from lace. His outfit is finished off with a pair of blue shoes.

The figure, painted on top of a grey background, stands out from the empty, sombre space around him.

His long, golden hair, worn loose and with a centre parting, falls down over his shoulders. In his hands he holds a cord, the other end of which is tied to a dog. In his rosy face, his expressive blue eyes stand out, looking straight at the viewer and making this work one of the best portraits of children that Goya ever painted.