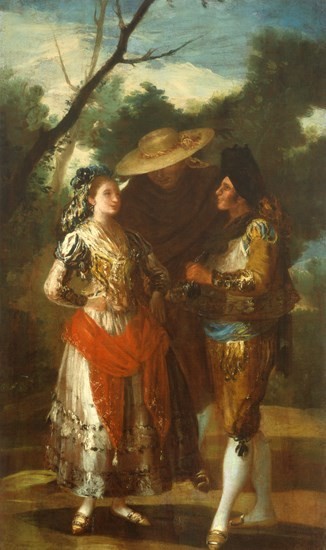 This work belonged to the Spanish ambassador in Paris, Quiñones de León. It was subsequently the property of Count Alessandro Contini Bonacossi (Ancona, 1878-Florence, 1955) and entered the collection of H. Kress in 1928.

Three people are engaged in conversation in a garden; in the centre is a man wearing a cloak and a wide-brimmed hat. On the right, a second majo holds the arm of the female maja, who is on the left-hand side of the group.

This painting has some important similarities to some of the tapestry cartoons that Goya made for the Royal Textile Factory of Santa Bárbara in Madrid. However, just as the guidebook of the Museum of Fine Arts in Houston tells us, there is no evidence that any tapestry was ever made from this image.

The protagonists of this painting clearly recall the three figures that Goya placed in the foreground of the tapestry cartoons entitled A Walk Through Andalucía and Maja and Cloaked Men (1777, Prado Museum, Madrid). The male figure with the cloak and hat from the work in the American museum is dressed in the same way as the cloaked man seated on a rock in the Prado cartoon.

In his representation of this rather picturesque character, Goya may have used the drawing on page 4r of his Italian Sketchbook, a study in the rendering of drapery which has many elements in common with the man wearing a cape we see here in Maja and Two Majos.

See Maja and Celestina and A Walk Through Andalucía.