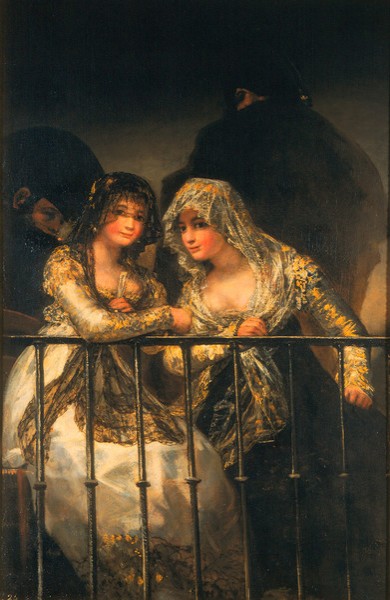 During the Spanish War of Independence, Goya produced some private works, including this one, Maja and Celestina, Lazarillo of Tormes, and probably Time or Old Women.

The painting appears in the inventory drawn up of the belongings to be shared between Goya and his son Javier on the death of his wife in 1812 as one of the "two paintings of young women on a balcony with inventory number twenty-four, valued at 400 [reales], the other painting being that of Maja and Celestina. It belonged to Javier Goya, and was bought from him in 1825 by Baron Isidore-Justin-Séverin Taylor for the King of France Louis-Philippe I of Orleans. It was housed in the Spanish Gallery in Paris until the monarch was deposed, and was subsequently sold at Christie's of London in 1853 for 70 pounds (lot no. 352). It was then located in the Colnaghi Gallery, and was later acquired by the Duke of Montpensier, who housed it in the San Telmo Palace in Seville. The painting passed to Prince Antonio of Orleans, the son of its former owner, and was kept at Sanlúcar de Barrameda. In 1911 it moved to the Durand Ruel collection in Paris. Finally, it was bought by a predecessor of the actual owner.

This attractive painting depicts two beautiful women sitting on a balcony and leaning on the iron railing. They are wearing sumptuous gowns in black, white, and gold. Their heads are covered with black and white veils, respectively. The details of the edgings and lace are superbly executed, and the details of the transparent black veil barely covering the forehead and eyes of the girl on the left are particularly pretty. The girls are whispering to each other while they both direct their gaze at the viewer. Behind the beautiful young women there are two men covered with black capes and broad-brimmed hats who represent a menacing presence.

The subject of the painting, which is clearly one of the genre scenes so highly valued by Goya, is not clear in this case because there is a lack of documentation backing up any possible theories. The young women could be prostitutes accompanied by their pimps who have come out on the balcony to attract clients. On the other hand, although their clothing is more appropriate of common people, these might be two upper-class women disguised in the dress of fashionable young women, who, well-protected by the height of the balcony and the presence of their lovers, amuse themselves by observing the ordinary folk below. The artist usually treated such subjects with sarcasm, criticising the society of his age. He had already done so in the case of the Caprices, and for this reason it is interesting that he returned to the same subject. Perhaps he wished to highlight the fact that despite the war some aspects of life went on as usual.

It has been suggested that this attractive painting was inspired by Murillo's Two Women at a Window (National Gallery of Art, Washington). In turn, this work provided the inspiration for Manet's 1868-69 work The Balcony. There is also a second version of this work, which is attributed to Goya but not accepted by all academics as being authentic.