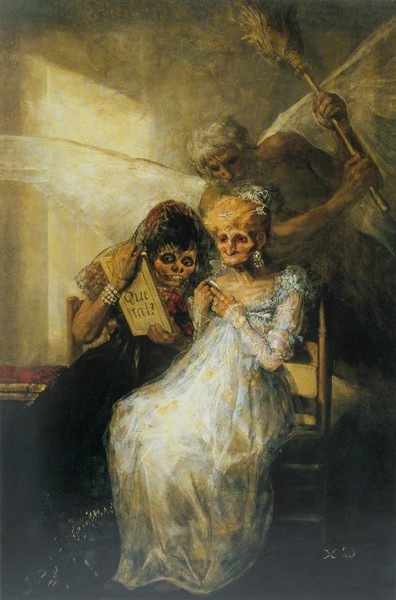 It is likely that this work was part of a group of paintings designed as a series, comprising Maja and Celestina on a Balcony and Majas on a Balcony. They may have belonged to Goya, and all the paintings in the set appear in the 1812 inventory, which makes it seem probable that they were produced as personal works, without a commissioning patron.

From 1812 to 1836 they belonged to the collection of Javier Goya and were located in Madrid. They were purchased by Baron Taylor along with six other works for the Spanish Gallery of Louis-Philippe of Orleans in Paris. They remained with this institution in 1848 under the inventory number 24, but were never on display. In 1853 they were auctioned at Christie's and sold to a collection in London, where they stayed until they were sold once more, this time to Mr.Durlacher, who acquired them for his Paris collection. They subsequently belonged to Mr.Warneck in Paris, and later to Miss Genil, Mr Reynart and Mr Sauvage, who donated them to the Lille museum in 1874.

In the inventory drawn up of Goya's belongings on the death of his wife in 1812, this work appears under the title Time. It is followed by the two paintings Maja and Celestina on a Balcony and Majas on a Balcony. This work was numbered 23 and valued at 150 reales, while the other two, both listed under number 24, were valued at a total of 400 reales. The three pieces were all mounted on the same thick frame, which in all three cases had been reused, as revealed by x-rays. The underlying compositions were also related, forming part of a series dedicated to the Four Elements. The three works had the same format and dimensions, although this painting was stretched, probably some time around 1873 just before it entered the collection of the Lille Palace of Fine Arts. It was accompanied by the painting Young Women, whose measurements are the same as the new dimensions of this work, and for this reason they have traditionally been thought of as a pair. In fact, it was given its modern title to create a contrast with that of Young Women.

The most important figure in the scene is a decrepit old woman with a thin, wasted, almost skeletal body. She is seated next to another old lady with the look of a procuress, and is holding a medallion in her hand which probably contains a likeness of herself when she was young and beautiful. Another possibility is that she is contemplating a picture of her long-lost love. The old woman is laden with jewellery of all kinds - ornaments in her hair, earrings, and bracelets - which celebrate the comfortable life she once enjoyed, while she now sits on a shabby wicker chair. Her white chiffon dress in the French style of years gone by has floral detailing in sky blue, and would doubtless be more appropriate for a young lady. Her friend is more discreetly dressed in a black gown and veil. The companion, a faithful servant during her whole life, holds up a mirror which reflects her wrinkled, melancholy face. The comparison between the figure in the medallion and the image she sees in the mirror evokes in her a tremendous chagrin. On the back of the mirror Goya has written "Qué tal?" ("How are you?"), a question which the old woman does not hear, engrossed as she is with the memory of her withered beauty. Behind the woman we can see the imposing figure of Chronos, the true protagonist of the scene, personified in the figure of a strong man with wings, beard, and white hair. He holds a broom with which he will sweep the old lady away, since the hour of her death is nigh.

Some writers have identified this old woman as being Queen María Luisa, based on the arrow-shaped hair pin which adorns the figure's blond hair, since the monarch wears a very similar one in the portrait Family of Charles IV. However, the woman's attire and her wish to look younger would be more appropriate of the infanta María Josefa of Bourbon, who was already an old lady when the group portrait of the family was painted.

Several authors have commented that the theme of this canvas has its roots in the general concept of the Caprices series. Moreover, Caprice 55 is directly linked to this painting, as it also depicts an old woman who is grooming herself before a mirror, unaware of the mockery heaped on her by the figures in the background. The legend reads "Hasta la muerte" ("Until death"), since right up until the moment represented here, the woman will keep preening herself in a pointless attempt to maximize her lost beauty with dresses, make-up, and jewels.

Goya was interested in the situation of women in his time. This work's meaning goes beyond a simple representation of the passage of time and lost beauty. It portrays the difficulties women faced in winning the love of a man if they were not beautiful or rich.

There is a second version of this work which was previously located in the collection of the Marquis of la Torrecilla. De Angelis thinks that this version may have been intended as a companion painting to the Majas on a Balcony housed in the Metropolitan Museum. Desparmet, on the other hand, believes the second version is an original while this work is a replica.