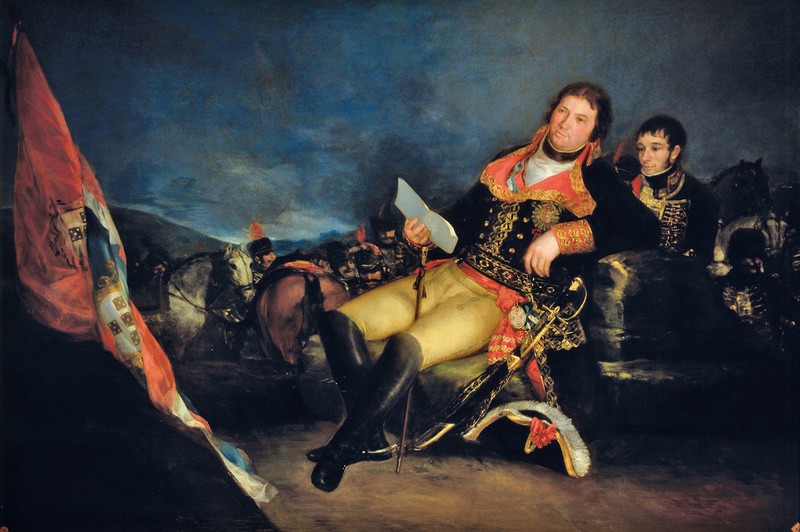 Executed between August and September of 1801 as a commission from Charles IV to commemorate the victory in the War of the Oranges, this work was in the Godoy collection and then later entered the academy in 1816.

Manuel Godoy Álvarez de Faria (Castuera, Badajoz, 1767-Paris, 1851) went from a provincial nobleman to prime minister during the reign of Charles IV, and became one of the most influential men of his time. He was Duke of Alcudia and Sueca, and came to be known as the Prince of Peace. He married María Teresa de Bourbon, the first cousin of the king and the future Countess of Chinchón, although he also took a lover, Pepita Tudó, whom he married following the death of his first wife in 1828.

Goya was commissioned to paint this portrait by Charles IV to commemorate the War of the Oranges, a military episode that occurred between May and July of 1801 on the Spanish-Portuguese border. It received its name after the Spanish forces took the city of Olivenza, in celebration of which Godoy picked some oranges and had them sent back home to his wife.

Manuel Godoy appears here dressed in the uniform of Captain General, on the battlefield. He is slouched down in an armchair, in a relaxed and arrogant manner, with his baton between his crossed legs and holding a piece of paper in his right hand. Behind him is another officer, who has been identified as the artillery captain Joaquín Navarro Sangrán. On the left-hand side of the composition we can see two captured enemy flags, which the king gave as a gift to Godoy, and in the background are a number of hussars and cavalry officers with their respective mounts. Behind all of these figures extends an open, rocky landscape, painted in a dramatic, sensationalist dusky light, which contrasts strongly with the bright, even light used for the main figure. At the time the painting was made, Godoy was at the height of his power.