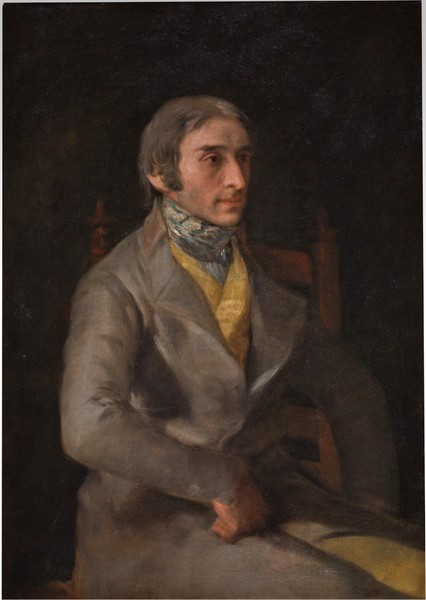 This portrait was probably made in Bordeaux after Goya had moved to the city, in which Silvela had already been living for over ten years.

It belonged to the subject's descendants: his grandson, Francisco Silvela; to his grandson's widow, Amalia Lorig; and later to his great-grandson, Jorge Silvela, Marquis of Silvela, who sold it to the Spanish Ministry of Development in June 1931. It was purchased to go into the Prado Museum.

Manuel Silvela y García de Aragón (Valladolid, 1781-Paris, 1832) was born into a large family. He studied law and moved to Madrid, where he held the position of court judge during the French occupation. He and his family left for Bordeaux upon Ferdinand VII's return, in 1813. Joining them in 1823 was their good friend Moratín, followed by Goya a year later. In Bordeaux, Silvela founded a school for Spaniards and became one of the most influential of all the Spanish exiles. He moved to Paris with Moratín in 1827.

Opinions differ with regards the date in which this portrait was made. With its dark colour palette, neutral background and simple composition, the portrait fits in far more with those from the artist's final period than with those from around 1810, the date which this portrait was traditionally thought to have been painted. At this earlier date, the subject still held the post of judge, was yet to leave for France, and the Spanish War of Independence was still raging. In the portrait, with his grey head of hair, the sitter looks closer to forty-three, which would have been his age in Bordeaux in 1824, than to twenty-nine, which would have been his age in 1810. Furthermore, the relationship between Goya and Silvela would have grown closer following the artist's arrival in Bordeaux and thanks to the connection between them provided by Moratín.

Silvela is shown here sitting in a chair, the back of which is visible over his shoulder. He is turning to the right and his gaze is fixed in the same direction. He wears a grey overcoat, yellow waistcoat and white and blue scarf. This romantic clothing also favours the hypothesis that the painting was made at the later date.