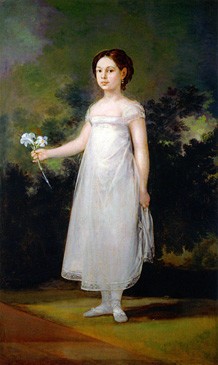 The reason for the commissioning of this portrait is not known, although we do know that Goya had enjoyed the support of the Marquis of Montehermoso, the sitter's father, who died in 1811.

This painting has been in a number of different collections: M. M. Boussod and Valadon of Paris; M. Heilbuth of Berlin; that of the Marchioness of Ganay, Paris; Galerie Georges Petit; and M. Bemberg, Paris, until it entered a private collection in 2001.

María Amalia de Aguirre y Acedo was Duchess of Castro Terreño, Countess of Echauz and El Vado, Señora of Villafañe and Marchioness of Montehermoso. She was born in Vitoria in 1801.

This work was presented for the first time in the magazine Les Arts (1900, no. 96, p.7): "We have before us one of Goya's most beautiful portraits, in which the whites of the girl's dress, which are of an incredible quality, are particularly admirable".

The girl, painted when she was ten or eleven years of age, is shown standing in the centre of the composition. She is wearing a long semi-sheer white dress that reaches down to her ankles. In her right hand she holds a bunch of white lilies, a symbol of purity and virginity. She is wearing her hair up, revealing her rosy face, which is tinged with a certain melancholic air. The background here is not the neutral space employed in most of Goya's portraits. Instead, we see a group of bushes in different tones of green, ranging from dark to light, providing a touch of luminosity, accentuated by the white dress of the subject, and giving the whole a sense of serenity and tranquillity.

According to Manuela Mena, this portrait of María Amalia is the first work in which we can see Goya's change of style towards something resembling pre-Romanticism, motivated in this instance, perhaps, by the model and her expression of premature maturity.