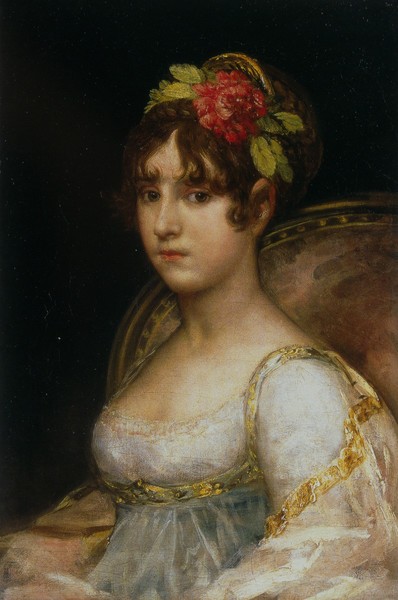 This work came from the collections of the Marquises of Santa Cruz and the Duchess of San Carlos de Madrid & Bürle de Zurich.

María Ana de Silva y Waldstein was born in Madrid on 14 November 1787. She was the daughter of María Ana Waldstein and José Joaquín Silva, IX Marquis of Santa Cruz. In 1802, at the age of just fifteen, she married Bernardino Fernández de Velasco. She died in 1805.

This half-length portrait depicts her seated, with an empire-line dress with a pronounced neckline, and wearing a flower in her hair. The meticulous manner in which Goya has painted the young woman's hair contrasts with the broad brushstrokes used to paint her face and ear.

The pale face and large eyes of the countess, which look out at the viewer with a certain shyness, nevertheless transmit a feeling of liveliness.

Various writers have suggested that this portrait dates from between 1802 and 1805, but according to Calvo Serraller it was a commemorative work painted after the death of the countess and using another portrait as model. This hypothesis cites the level of abstraction of the technique used in the clothing, with sketchy brushstrokes, comparable to the method seen in other, later portraits made during the time of the Spanish War of Independence.