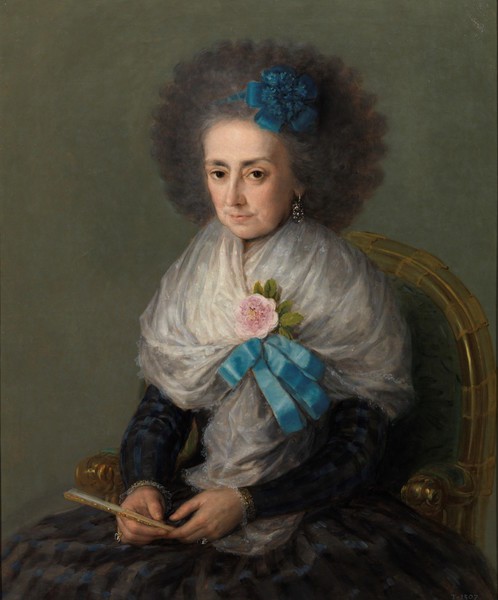 This work was bequeathed to the Prado Museum by Alonso Álvarez de Toledo, XXI Count of Niebla and XV Marquis of Los Vélez. It was accepted by the museum trust on 6 March 1926.

She was a woman of strong character who devoted herself to administrating the assets of her son, the XIII Duke of Alba, and her daughter-in-law.

This half-length portrait shows her seated, wearing a dark outfit adorned with a shawl of white gauze decorated with a blue rose and ribbon, conferring upon her a notable air of elegance. She wears an impressive grey curly wig, decorated with a dark blue bow.

Her hands, rendered with great precision and strength, according to Gudiol, hold a fan, with which she appears to be playing.

Her face, in keeping with that of a woman of sixty, the age of the sitter when Goya painted her, denotes intelligence and astuteness, qualities that would have served her well in the administration of the family assets. Like the majority of Goya's portraits, the figure is depicted in a neutral space, with no spatial references around it. A shaft of light coming from the left-hand side illuminates the figure, highlighting the shawl that covers her shoulders and the delicate, rosy skin of her face.

There is another version of the work ( oil on canvas, 85 x 70 cm, Collection of the heirs of the Marquise de Acapulco) which Valentine Sambricio estimated by Goya.