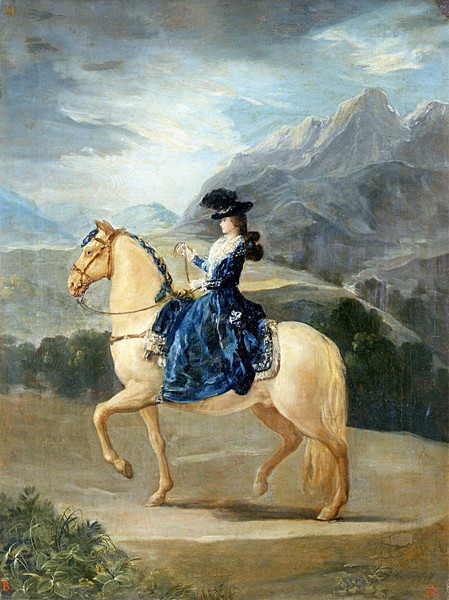 Goya probably painted this sketch in 1783, during his first summer in Arenas de San Pedro (Ávila), in order to make the finished painting (now lost) from it later in Madrid. The final painting was almost certainly commissioned as a companion piece to that of the Infante, painted by Francesco Sasso en 1767.

This is a preparatory sketch of the Infante Luis Antonio de Bourbon's wife on horseback, looking forwards and wearing a blue riding outfit. Her head is extravagantly decorated with feathers and she is holding the animal's reins with great poise, her posture reminiscent of the equestrian portraits by Velázquez which Goya made etchings of in around 1777-1778.

The painter has situated the figure in a natural setting, with the backdrop probably representing the Sierra de Gredos mountains. According to Manuela Mena, the scenery and the exquisitely painted plants in the foreground tie this sketch to the portrait of the daughter of the Infanta, María Teresa de Bourbon, the futureCountess of Chinchón, painted in 1783.

In the letter that Goya wrote in Madrid to his close friend Martín Zapater on 2 July 1784, he mentions the finished painting: My dearest Martín: I am skinny and I am not working much. I still have not finished the horseback portrait of the Infante's wife, but there is not much left to do.