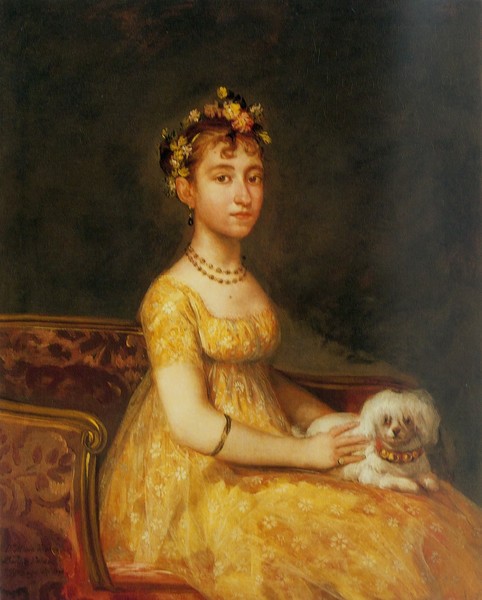 This work was in the Stanislas Orossen collection in around 1925. It later entered a private collection.

According to research done by Manuela Mena, this portrait and that of the subject's mother, Leonora Antonia Valdés de Barruso, with which it forms a pair, had not been exhibited in Spain until 2008, and can be considered the very first portraits of bourgeois women.

Until very recently, hardly any biographical details were known about María Vicenta Barruso Valdés (1790-1809). Today we know that she was the daughter of Leonora Antonia Valdés de Barruso and a fabric merchant with ties to the Royal Silk, Gold and Silver Factories of Talavera de la Reina (Toledo) and that she was fifteen years old when Goya painted her.

She is shown here in front of a neutral background, seated on a large period armchair upholstered with a floral fabric in reddish tones, which contrast with the yellow of the sitter's empire-line, gauze dress decorated with daisies that match those adorning her head. She wears her hair gathered up in a bun. Her ears are adorned with black pearl earrings, and around her neck she wears an unusual double-wrap jet necklace, just like that of her mother. On her right arm we see a bracelet and a ring on the little finger of her right hand, perhaps in reference to her upcoming wedding to her cousin, Francisco Javier Valdés Andayo. She is holding a white dog, painted with quick, vigorous brushstrokes.

This lady's youthful face, whose large eyes look out at the viewer, has a serious look upon it but she nonetheless appears comfortable posing for the great artist.

This portrait and its pair are both characterised for their vivid colours and for the way in which the artist has employed light to brighten the composition.