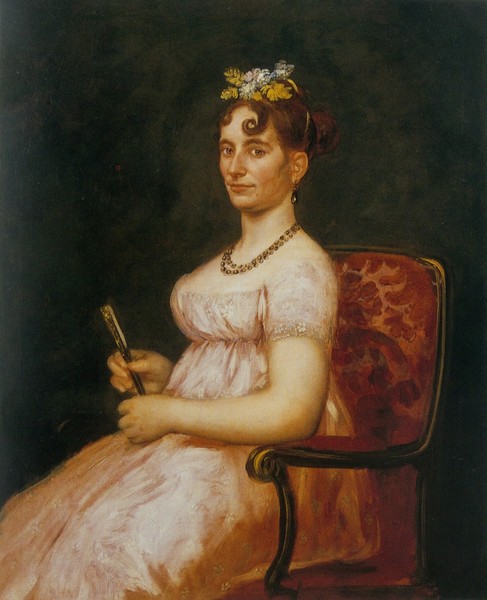 This work was in the Stanislas Orossen collection in around 1925. It later entered a private collection.

Until very recently, hardly any biographical details were known about Leonora Valdés de Barruso, born in San Andrés de Linares (Asturias) in 1760. Around 1789 she married Salvador Anselmo Barruso de Ybarreta, possibly a fabric merchant, with whom she had a daughter, María Vicenta, who appears in the portrait that forms a pair with this one. She was forty-five years old when Goya painted her. Here she appears in profile, sitting upright and looking straight out at the viewer. She wears an empire-line outfit, in pinkish hues and with a low neckline that further emphasizes her prominent bust. In her hands she holds a closed fan, symbolizing her unavailability. Adorning her neck is a necklace that is almost identical to that worn by her daughter in the companion portrait, as is the case with her earrings. Her hair, gathered into a bun, is decorated with flowers.

According to Manuela Mena, this portrait, together with that of the subject's daughter, form a perfectly balanced pair, although the greater volume and height of the mother do appear to assert their authority over the younger woman.