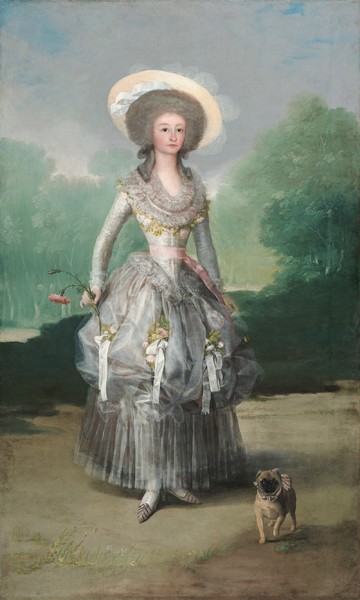 This work was probably painted in 1786 when Mariana married Francisco Antonio Moñino y Redondo, Spain's Ambassador to Portugal and brother of the Count of Floridablanca.

On the death of the Duchess all her possessions were inherited by her oldest daughter, who was married to the future Marquis of Miraflores. This fact explains the provenance of this canvas:

it was passed down to the Marquis of Miraflores in Madrid, and acquired from him by Andrew W. Mellon. From his collection, the painting went on to form part of the collection of the National Gallery of Art, Washington.

The Marchioness of Pontejos (1762-1834) lived in Madrid in a palace on the Carrera de San Jerónimo until1820 when she was forced into exile to Paris. She is wearing an aristocratic grey dress decorated with chiffon, lace, pink ribbons and flowers, which give a touch of cheer and liveliness to her outfit. Goya spent a great deal of time working on the details of this dress, as can be seen from the wrinkles in the chiffon of the overskirt, which are magnificently executed. The sitter's showy, powdered wig is worn under a cream coloured bonnet, while on her feet she wears heeled chopines.

Her inexpressive face is fine and delicate. In her right hand she is holding a rose. By her side we can see a dog - a symbol of faithfulness - which is executed with light brushstrokes yet is realist in style. This type of portrait, with its idyllic landscape in the background, shows the influence of French and British styles.