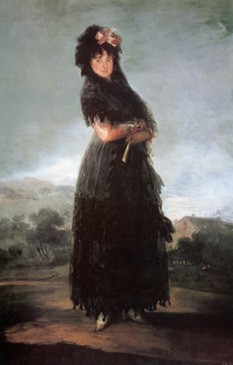 This work came from the family of the Marquises of Santa Cruz. In 1883 it was put up for auction at the Hôtel Drouot auction house in Paris, and later belonged to the Marquis of La Remisa, to Queen Isabella II, Groult, Grosnier, and finally David Weill, who donated it to the Louvre in 1976.

María Ana Waldstein (1763-1808) was born in Vienna and came from a noble Austrian family. She was married at the age of eighteen, in Madrid, to the Marquis of Santa Cruz, a man with close ties to Goya and who occupied an important post in Madrid's court.

She was a great lover of the arts, practising oil painting, drawing and pastels, and becoming a member of the Royal Academy of Fine Arts of San Fernando. She often travelled to Italy and lived in Paris, where she became friends with Napoleon when he was still First Consul.

Goya painted the subject standing and full length, in front of a background landscape of trees and hills. She is wearing a black, high-waisted skirt with lace edging that matches the mantilla which covers her shoulders but reveals the pink clothes covering her arms, the same colour as the bow which decorates her hair. In her left hand she is holding a fan. On her feet are pointed white shoes, decorated with golden trimmings.

The attractive, carefree and youthful face of the marchioness is painted in rosy pink flesh tones, giving her a very healthy appearance.

The work is especially interesting for the contrasts between the blacks and the pinks, a colour harmony which the artist often employed.

In 1865, Louis Guillemardet donated an old small-scale copy of the work (52 x 34 cm) by an anonymous artist to the Louvre. Some writers had previously attributed this same work to Goya.