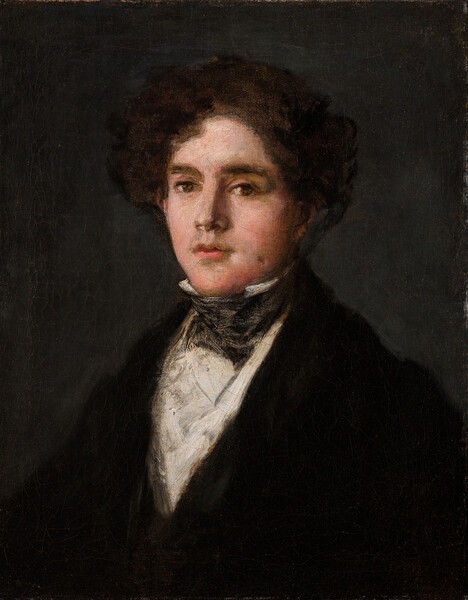 This portrait was painted during the last trip that Goya made to Madrid from Bordeaux, in the summer of 1827. The last known news of its whereabouts was that it was in the collection of George A. Embricos, in Lausanne (Switzerland). Nowadays this portrait is at Meadows Museum, Museum Purchase with Funds Donated by The Meadows Foundation and a Gift from Mrs. Eugene McDermott, in honor of the Meadows Museum’s 50th Anniversary.

Goya's grandson, Mariano (see biographical information in Mariano de Goya), apparently was painted by his grandfather on three occasions, being a young man of twenty-one years of age when the last was made.

In this work we see the bust portrait of a handsome young man dressed in jacket, white shirt and a dark tie which covers his neck all the way up to his chin. His penetrating gaze is fixed almost insolently on the viewer. Of interest is the mark on his left cheek, probably one of the scars that Lafuente Ferrari mentions following his interview with the residents of the town where Mariano died, who swore that his body was covered in scars from the many confrontations that his strong character and bad temper had led him to. The portrait is executed with great agility, especially in the shirt, where the bristles of the brush have left clear marks. The colours are limited to black, white and those used for the flesh tones, as is the case in all of Goya's final portraits.

It was also common for the artist to sign and dedicate these late works, also adding, with a certain pride, his own age. The inscription for this piece is on the rear. Today it is hidden underneath the relining.