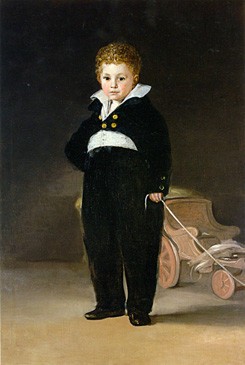 It is currently in a private collection.

He was Goya's favourite grandchild and is painted here with the utmost care and attention.

In later life, Mariano went on to work in the mining business, the buying of land and the trading of his grandfather's works of art, bringing him high profits and considerable wealth.

In this portrait, painted during the Spanish War of Independence, Mariano Goya, shown standing, would have been around four years of age. He is dressed in elegant dark clothes, the gold buttons of his little jacket standing out, along with the large-collared white shirt framing his rosy face. This curly, blond-haired boy looks tenderly out at the viewer. In his left hand he holds a cord tied to a toy carriage, whilst his right hand is hidden behind him. Once again, the artist has painted his sitter in front of a dark background, as in most of his portraits.