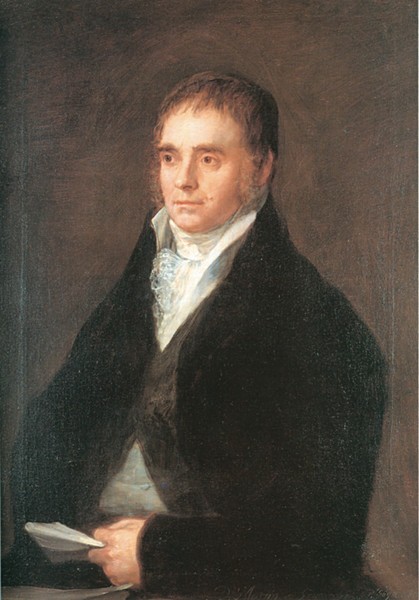 It is not known for certain whether or not this work belonged to Javier and Mariano Goya. It was in the collection of the Marquis of Casa Torres and then that of the Marchioness of Casa Riera, in Madrid, Ca. 1968. It was acquired from her heirs by its present owner.

This portrait, which forms a pair with that of the sitter's wife Juana Galarza de Goicoechea also painted by Goya in the same year, depicts Martín Miguel de Goicoechea (Alsasua, Navarre, 1775-Bordeaux, 1825) an ilustrado merchant and the father-in-law of the painter's son. In addition to occupying, in 1805, an important post at the Bank of San Carlos, both him and his family became one of the largest shareholders of the Royal Company of the Philippines.

At the time of his death, in Bordeaux, he was buried alongside Goya and his remains were later moved to the chapel of San Antonio de la Florida, in Madrid, where they remain to this day, next to those of his wife.

This half-length portrait shows Don Martín Miguel in front of a neutral background, turning slightly to the right and wearing a black dress coat, waistcoat, white shirt with frills and a white tie. Between the fingers of his right hand he holds a piece of paper, in reference to his profession of merchant and banker.

His face is delicate, with a calm, penetrating gaze, with Goya once again representing his psychological insight into his sitter.

In the neutral background, it is still possible to see the reddish primer that the artist applied to his canvases before the start of each painting proper.