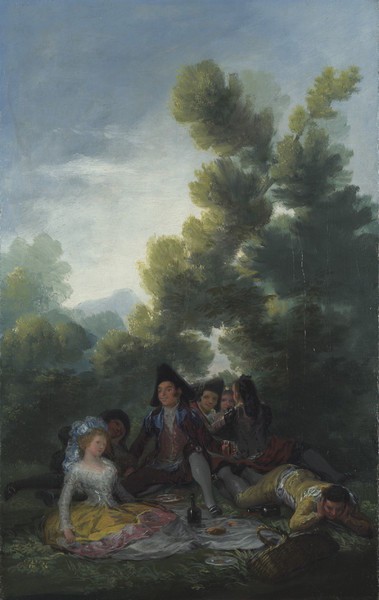 The tapestry cartoon for which this sketch was made was never in fact painted. It formed part of the series that would have decorated the bedroom of the Infantas, a commission that Goya received towards the end of 1787 (see Blind Man's Buff).

The sketch was acquired from the artist by the Duke and Duchess of Osuna in 1798 and it remained in the cabinet that the Duchess had in La Alameda until it was sold at the time of the bankruptcy of the ducal household in 1896, when it was bought by the National Gallery, London.

Five men and two women are enjoying a picnic in the countryside. Behind them, a number of leafy trees close off the composition, making the horizon all but invisible to us and squeezing the figures into a crowded foreground. The majos are depicted in a number of different poses. The one in the centre directs his clearly lascivious, desirous gaze at the woman on the left, whilst the man on the right-hand side stretches out on the ground, probably in an advanced state of inebriation. The other men talk with the second woman, who is hidden behind them.

The dimensions of this sketch correspond with those of the third of the stretchers that appear in the invoice delivered by the carpenter Serrano. In the catalogue of objects put up for sale by the Duke and Duchess of Osuna, there is mention of a scene depicting a country picnic.

Yriarte had the opportunity to view the work in the Osuna residence in La Alameda, together with the sketches for Spring, Summer and Winter, which we know thanks to the description he gave of the piece, in which he praises it as "an authentic Spanish Watteau". Given that Yriarte had overlooked the sketch for Autumn, supposing that it was a small painting that the Goupil brothers had bought from Ángel Tadei, Arnaiz suggests that this sketch could be that of Autumn, justifying this hypothesis by pointing out the ochre hues and the presence of wine - the symbol of the September harvest - at the centre of the composition. What's more, this same writer states that it was very unlikely that the Osunas would have sold Autumn by itself and before the bankruptcy of the ducal household.

But if this hypothesis were correct and this painting were actually Autumn, a corresponding tapestry would have been made, and the cartoon sketch The Grape Harvest - which was made into a tapestry - would be the missing one.

Elsewhere, Tomlinson is of the opinion that the subject matter of this painting is not worthy of forming part of the décor of a royal bedchamber, and that the composition does not follow the pattern of open landscapes that Goya was employing throughout this series. The American writer links Country Picnic with another small painting, that of Stagecoach Hijacking, which also belonged to the Osunas, and puts forward the idea that Goya painted it specifically for them, in order to complement the works they had acquired from the painter in 1798.

An additional strip has been added around the four edges of the canvas.