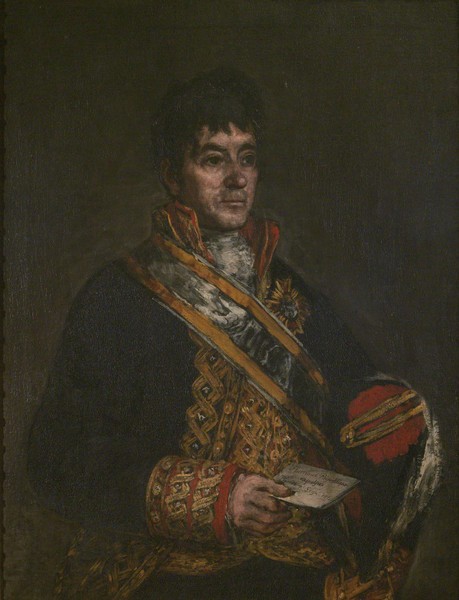 In around 1900 this work belonged to the collection of Enrique O'Shea, in Madrid. In 1908 it went to the Miethke gallery, in Vienna, which organized a small exhibition of works by Goya. It was acquired by Arthur Mayer, of Karlovy Vary (formerly Karlsbad), for his private collection. It appears to have been acquired by the National Gallery of Prague in 1938.

Miguel de Lardizábal (San Felipe de Tlaxcala, 1744-Vergara?, Vizcaya, 1825?), was born in Mexico and moved to Madrid in 1760, returning to the country that his father, who was from the Basque Country, had left behind to go to New Spain. He received an excellent upbringing and became a cultivated man. In Spain he held official posts related to foreign affairs, forming part of Bonaparte's government but always remaining loyal to Ferdinand VII, whom he admired due to his absolutist convictions. Upon the return of "the Desired", he was named Minister of the Indies and President of the Company of the Philippines until he was dismissed and imprisoned following accusations that he had shown excessive favour towards the interests of his native land.

For some time the figure in this portrait had been identified as General Espoz y Mina, until Soria corrected this error. The half-length portrait shows Lardizábal in official dress and bearing the decorations of a sash and cross. His black jacket is heavily decorated with golden needlework at the cuffs, collar and around the buttons, which Goya has faithfully recreated using heavy, impasto brushstrokes that shimmer above their dark background. Under his left arm he cradles a hat, whilst his right hand holds a letter on which Goya has inserted the inscription, which, translated from the Latin would read something like "Brought down by affairs of the State", in reference to his removal from office. His face, framed by his somewhat dishevelled hair, also speaks of the situation in which the subject was living at the time, and it is also reflected in his bitter gaze.

In terms of technique, the dark colour palette and the use of short, heavily-loaded brushstrokes gives a foretaste of how Goya would execute his Black Paintings.