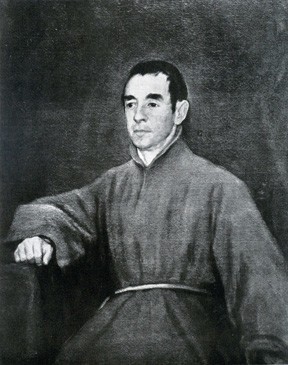 This work belonged to the old Kaiser Friedrich Museum in Berlin (now the Bode Museum) when it was destroyed on 5 May 1945.

This slightly more than half-length portrait of an unidentified Franciscan monk was described by Beruete as a work full of life. The monk wears the Franciscan habit tied at the waist with a cord, and his right hand, closed into a fist, rests on the table beside him. He is depicted almost directly from the front, although his head is turned slightly to his right. The monk's friendly-looking face, with its thick eyebrows, expresses joy through a suppressed smile. The colour palette employed, including the grey of the background, was mostly a dark one, with the single exception of the red tablecloth.

There exists a copy or replica of this work, the whereabouts of which are unknown, but which we know of thanks to a reproduction, a photograph by Moreno, in Colección de cuatrocientos cuarenta y nueve reproducciones de cuadros, dibujos y aguafuertes de Francisco de Goya. This book says that there is a magnificent portrait of the same model in the Berlin Museum, and the photo's caption reads "Fray Miguel Fernández?". However, it is hard to believe that this portrait is of the religious figure from the Cordovan town of Bujalance, who was painted by Goya in 1815 with all the opulence and wealth that he enjoyed as administrator and bishop of Quito.