Harvest of the dead (Muertos recogidos) 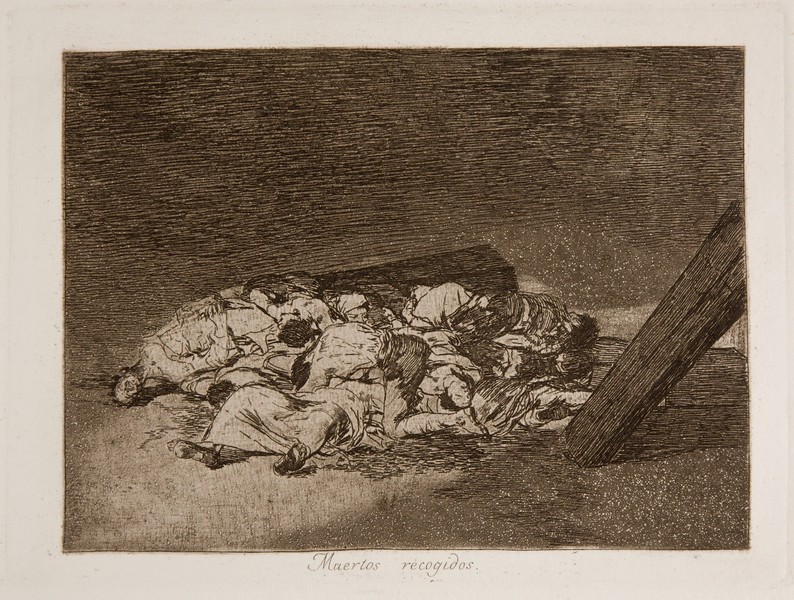 44 (on the lower left-hand corner of the plate).

A group of corpses lies piled up on the ground with two coffins in a dark space. The sprawling postures of the bodies, the expressions on their lifeless faces and the way in which they have been piled up evokes a strong sense of drama in this scene, in which the viewer is confronted by a jumble of corpses that have been stripped of their dignity.

The artist employs various techniques in order to highlight the pile of bodies in the centre of the composition, increasing the intensity of the dramatic atmosphere. Goya has filled the background with short, rapid, horizontal strokes in aquatint, while on the left-hand side of the print there is a lighter area worked only superficially in aquatint. This lighter area fuses with the shapes of the corpses, which are mainly dressed in white garments. The pile of bodies thus becomes a large focus of light in the print.

In this scene Goya continues to explore the theme of the previous print, no. 62, The beds of death (Las camas de la muerte), which shows several bodies covered with sheets. It is also linked with print no. 64, Cartloads for the cemetery (Carretadas al cementerio), which deals with the same subject matter. The three images reflect the insalubrious conditions in which the bodies of the dead accumulated in cities, alluding to the scarcity of resources available to provide a decent burial for the deceased. Goya produced these three pieces as the closing works in the series of prints narrating firstly the scenes of appalling violence that took place during the war and subsequently the devastating effects of famine on the population.

Therefore, this work can also be linked to others in the series depicting piles of bodies, such as no. 12 This is what you were born for (Para eso habeis nacido); no. 16, They make use of them (Se aprovechan); no. 18, Bury them and keep quiet (Enterrar y callar); no. 22, All this and more (Tanto y mas); no. 23, The same elsewhere (Lo mismo en otras partes); and no. 60, There is no one to help them (No hay quien los socorra).

The plate is stored in the National Chalcography (cat. 314).