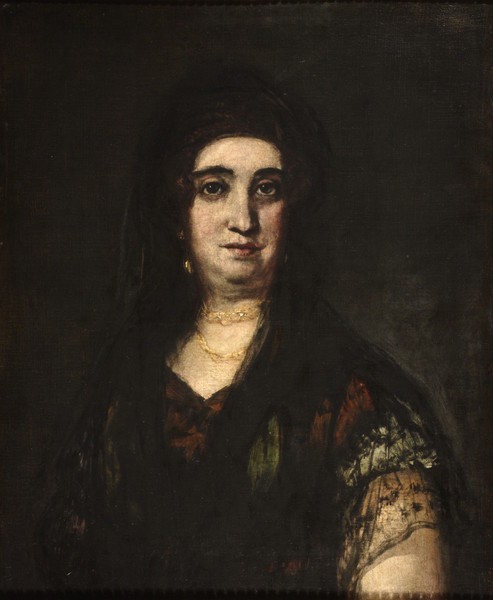 This work belonged to the collection of Gustavo Bauer, in Madrid, then to that of Emil Bührle, in Zurich, and later to an unknown private collection. It was acquired by the Aragonese Regional Government at an auction held at the Madrid home of Edmund Peel on 28 February 1991.

The woman with the mantilla had usually been identified as Leocadia Zorrilla de Weiss (Madrid, 1788-1856), Goya's housekeeper and companion during the final years of his life. It was Xavier de Salas who, in the appendix of Sánchez Cantón's work on the Black Paintings, made the connection between the woman in this portrait and Leocadia, the name that Brugada gave to the woman in A Manola in the inventory he made of the paintings found in the Quinta del Sordo. Some scholars, including Gudiol and Camón Aznar, insist that this woman was Goya's supposed lover. However, other writers have pointed out that Leocadia's age at the time of Goya's death was thirty-nine, and the woman shown in this work appears to be somewhat older. Without documentary evidence to shed further light on this question, however, it is not possible for now to know for sure who the woman painted in this work is. The portrait depicts a mature woman, dressed in black and wearing a black mantilla. She wears a gold necklace and earrings. The half-length portrait shows her looking straight out at the viewer but with her body turned slightly to one side. Her face is dominated by her large, dark eyes, the witnesses of innumerable experiences, and we sense a certain hint of pride in the half smile that is drawn upon her lips. Considering that Leocadia was a woman with a strong temperament, if this were a portrait of her, this expression on her face could be a subtle allusion to her character.

As in all of the portraits that Goya made in the final years of his life, the colour palette is limited to dark tones and white, used in particularly strong contrast in this portrait, where the pale skin of the lady stands out dramatically from the black background. Of particular interest are the details of the see-through mantilla over her arm, as well as the darkness of the background, which holds the figure fast and blends into her outline.