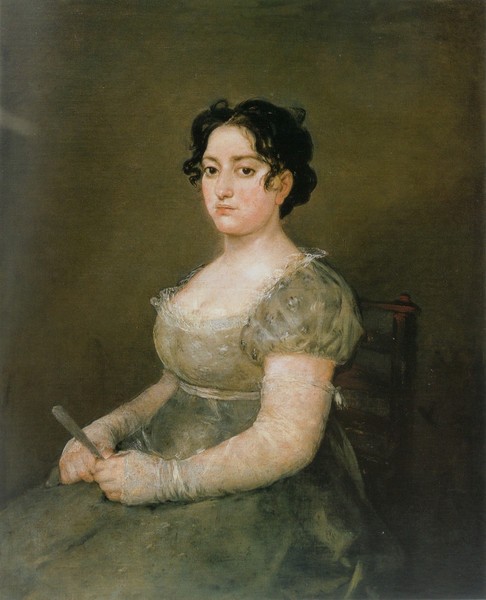 This painting was initially in the possession of the Goya family. It later entered the collection of the Marquis of Salamanca, who purchased it from Mariano Goya, the artist's grandson. Subsequently, it belonged to the collection of Alfonso Oudry, who sold it to a Mr Edwards, who in turn sold it to Mr. Kums.

The work was finally acquired by the Louvre in 1898.

Today, the identity of the woman depicted in the portrait is not known for certain. Different scholars of Goya's work have varying opinions on the matter. Gudiol identifies this woman as Doña Catalina Viola, according to the inventory of Goya's belongings made by Brugada. Xavier de Salas and Enriqueta Harris both affirm that this lady could be Gumersinda Goicoechea, whom Goya painted in 1805 on one of the medallions made to commemorate her wedding to Javier Goya, the artist's son. The facial similarities between the two portraits suggest that they could well be of the same person, although in this painting the sitter appears fuller of figure, owing, according to Harris, to the fact that she was pregnant with or had just given birth to Mariano, Goya's only grandchild.

The subject is depicted in front of a neutral background, seated on a simple wooden chair. She wears a lightweight grey dress with a pronounced neckline decorated with sheer lace. Her arms are covered by semi-sheer gloves which are left open at the hand to reveal her fingers, in which the sitter holds a closed fan that she appears to be playing with.

Her rosy face is turned to look out at the viewer, her large, dark and slightly fallen eyes standing out.

The most remarkable thing about this work is perhaps the difference between the finish used on the face and the light brushstrokes used on the dress, which help to give an overall effect reminiscent of those achieved much later by the Impressionists.