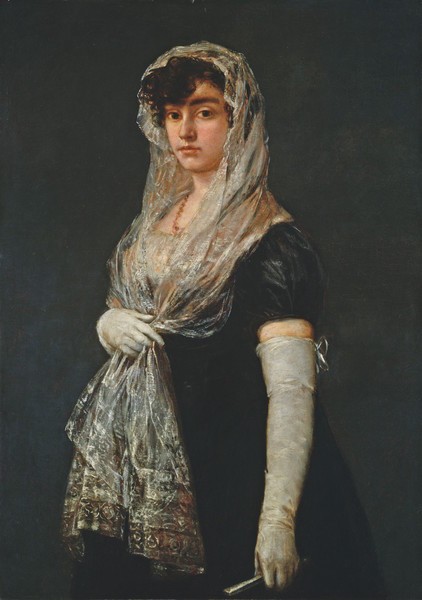 This work has belonged to a number of different collections and owners: Serafín García de la Huerta, Madrid; the Marchioness of Heredia, Madrid; Benito Garriga, Madrid; Hubert Debrousse, Paris; and Henry Osborne Havemeyer, New York. It was bequeathed to the National Gallery of Art in Washington in 1963.

The identity of the woman depicted in this portrait is still not known for certain. Different scholars of Goya's work have given the painting different titles, including Yriarte, who in 1867 identified the subject as The Bookseller's Wife, and Viñaza, who in 1887 called the work The Bookseller from Calle de las Fuentes. Beruete linked her to the wife of a bookseller in Calle Carretas, in Madrid, named Antonio Bailo, whose bookshop was located at number 4 of this street. However, the most recent title given to this painting is that of Young Lady Wearing a Mantilla and Basquiña, since the previously suggested titles appear to be more the result of a romantic legend than anything else.

In any case, this is a three-quarter-length portrait of a woman standing before a neutral background.

She is wearing a basquiña, a type of skirt worn by ladies of the period, and a white lace mantilla that covers her head, revealing only some of her curly hair, which falls down over her forehead. Her arms are covered by a pair of pale-coloured gloves, giving her an elegant appearance. In her left hand she holds a closed fan, whilst her right hand gathers together the mantilla in front of her chest. Around her neck she wears a necklace.

The mantilla is magnificently rendered in quick brushstrokes, giving the sensation of extreme realism shared by most of Goya's portraits.