Or these (Ni por esas) 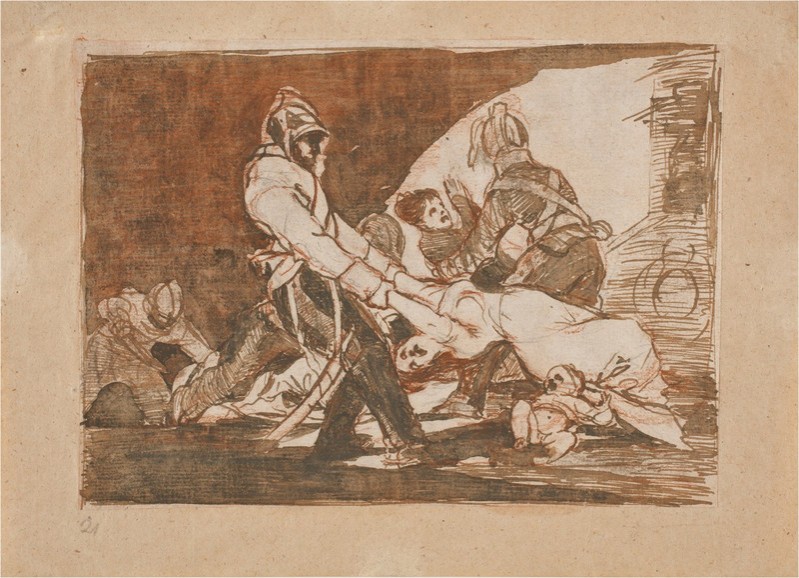 Goya has sketched out here on paper a reversed but otherwise almost unchanged image of what was later to become the finished print. The artist worked hard in this case to produce an image that would very closely resemble the subsequent etching. The archway in the background is drawn as a solid black surface, and the French soldier and the woman whom he has seized by the wrists both wear white clothes which draw our eye to them. At the woman's feet we see a naked child, crying, and, behind them, another woman and soldier locked in a violent struggle. Also included in the background is the church, visible through the archway. However, in the darkness, Goya has also sketched out a woman clutching a dagger in her hands, with which she defends herself against a figure lying prone on the ground. Later on, when he makes the print, the artist changes his mind and replaces these two characters with a single, crouching figure. The decision to choose this static figure for the background was probably made so as not to distract the viewer from the two struggling figures placed in the foreground.

Enrique Lafuente Ferrari has emphasized the Rembrandtesque character of the composition, in which Goya uses a more complex and refined technique than in many of the other preparatory drawings for the series, where he works with sanguine, since here he also makes use of a sepia wash.

This drawing was not transferred to the copperplate.