It is no use shouting (No hay que dar voces) 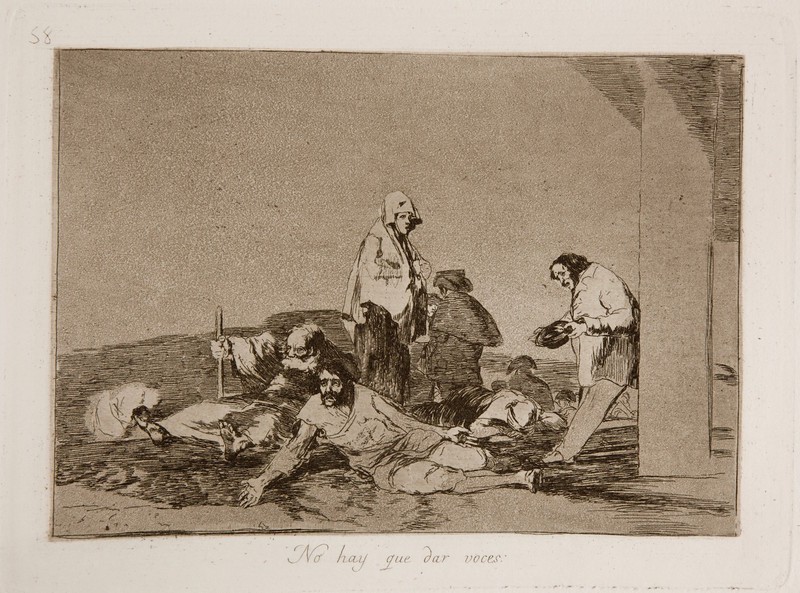 34 (on the lower left-hand corner of the plate).

The second artist's proof shows that the right-hand side of the skirt worn by the central standing figure and the left shoulder of the man closest to the viewer were retouched with burin. The aquatint details on the back and upper parts of the standing figure were also burnished.

In this print Goya sets up a contrast between the elegantly dressed French soldiers in the background - one of whom is wearing a top hat while the other located further in the background wears a fashionable bicorne hat - and the tragic poverty of the skeletal figures begging for help in the foreground. One of the starving figures leans on the wall, extending a hat in a request for alms. In the centre of the composition a woman whose head is covered gazes into the distance with a lost expression, while in the foreground of the print two dying men make desperate pleas for help.

According to Hofmann, the bearded men in the foreground bear a similarity to the vagrant philosophers depicted by Goya, such as Diogenes in You will not find him (No lo encontraras) from Album C. Moreover, the figure leaning on the post is reminiscent of the injured man depicted in Caprice no. 10, Love and death (El amor y la muerte).

As suggested by Juan Carrete, this print can be interpreted as a variation on print no. 54, Appeals are in vain (Clamores en vano), which deals with the same subject. In both cases, the works' titles and images express the same concept: the futility of asking for help and the impassive coldness of the French soldiers, indifferent to the suffering of the starving.

The plate is stored in the National Chalcography (cat. 309).