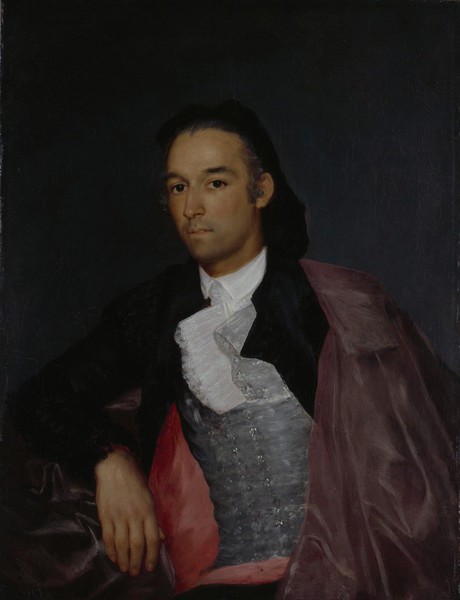 This painting belonged to Goya's family, and appears in the inventory of Javier Goya's possessions drawn up in 1812. Later, it passed to the widow of Vera de Sevilla, and subsequently to Henri Rochefort in Paris, the Collection of the Infante Don Sebastián Gabriel de Borbón y Braganza of Pau, to León Laffite in Madrid, his descendents, then to Rodolphe Kahn in Paris, to William Adby in London and finally to Arthur Sachs in New York. It was acquired by the Kimbell Foundation in 1966.

Pedro Romero (Ronda, Málaga, 1754 - 1839) was a celebrated bullfighter from a famous bullfighting dynasty. In 1785 he inaugurated the Bullring of Ronda. Already older and finding himself in financial difficulties, he applied for the post of teacher at the Bullfighting School of Seville. Leandro Fernández de Moratín described Romero as a "bold, brave, self-controlled and very handsome" man.

In this portrait Pedro Romero was at the height of his career, aged between 40 and 50. The half-length figure stands out strongly against the dark background.

His hair is hidden under a black scarf which frames his handsome face with its dark skin, large dark eyes, well proportioned nose and long sideburns. He is dressed in his best bullfighting attire, in a grey waistcoat, white shirt with frills and black jacket with red lining. His left shoulder is covered by a cherry coloured cape. The buttons of his waistcoat are picked out very delicately in minute detail, as are the folds of his shirt.

His right arm rests on a table, the hand in a relaxed, easy pose.

The overall atmosphere of the portrait is one of serenity, affability and sincerity.

Various replicas of this painting exist.