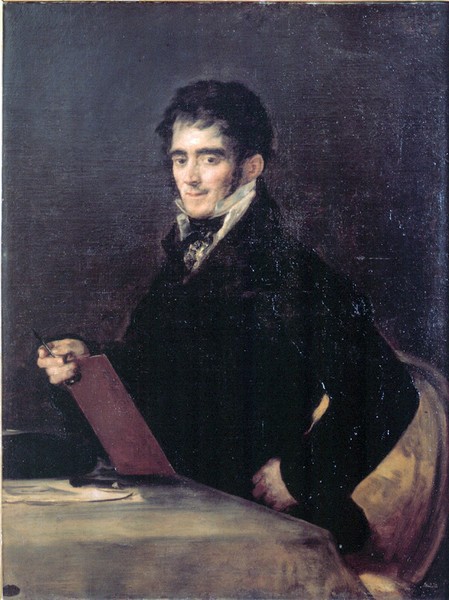 Goya probably painted this portrait of his colleague and friend in 1815, to commemorate Esteve being named Court Engraver.

The work belonged to the sitter and was inherited by his descendants. Antonio Esteve, his nephew, donated it to the Royal Academy of San Carlos, Valencia, in 1818.

Rafael Esteve y Vilella (Valencia, 1772-Madrid, 1847) was a renowned engraver, the son of the sculptor José Esteve Bonet and cousin of the painter Agustín Esteve y Marqués, with whom Goya had worked before. It was perhaps through his cousin that his professional relationship with Goya began, and which ended up with the two men becoming good friends. It has been suggested that they worked together on Goya's Bullfighting series of prints.

The engraver is shown here seated in an elegant chair, upholstered in yellow, in front of his desk, of the same colour, with an upright posture and his left hand on his hip. In his right hand he holds a burin and a copper plate which he is resting on the table. On top of this table we can see a print and all those elements that allude to the sitter's profession, of which he was evidently proud. Esteve's posture, his pose and impeccable attire, consisting of a black jacket, white shirt with frills, and black tie, give him a certain air of superiority, which is heightened by the low viewpoint that Goya has employed and which obliges the engraver to look down at the viewer. His face reflects the confidence of a well-known artist who, shortly after the realization of this portrait, was to become the director of the National Chalcography.

The Lázaro Galdiano Museum has a short bust portrait of the engraver (inv. 2351) which used to be attributed to Goya due to the fact that it is similar in appearance to this portrait, and also because it belonged to Rosario Weiss.